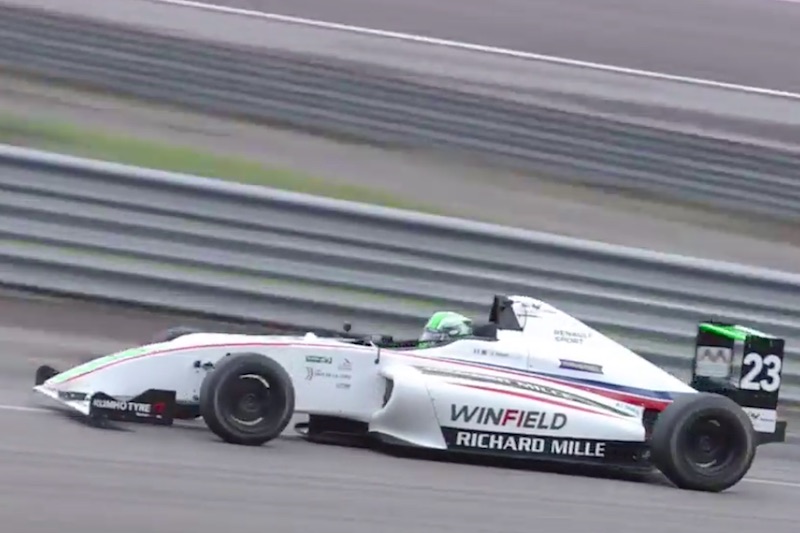 Caio Collet made a late pass on Adam Eteki to win the third and final French Formula 4 race at Dijon and increase his championship lead.

From fourth on the grid, Collet gained a place from a slow-starting Pierre-Louis Chovet at the start, as pole-sitter Eteki used the inside line to keep race one winner Ugo de Wilde at bay.

By the end of the first lap, Collet was challenging de Wilde, and eventually got past shortly before half-distance around the outside of Turn 1.

Collet immediately reduced Eteki’s advantage from one second to 0.6s, and then down to 0.3s on the next lap.

Eteki initially responded to the threat, but the gap came back down again towards the end, and Collet got a very good run down the pit straight with a minute-and-a-half left on the clock.

The Brazilian claimed the inside line and managed to sneak past Eteki to take his third win of the season.

Ulysse de Pauw came from eighth on the grid to complete the podium, passing fellow Belgian de Wilde around the outside of the first corner with four minutes to go.

Collet’s points lead is now 23.5 points over de Wilde, who was beaten to fourth by Theo Nouet.

De Pauw is two points further behind in third, and Eteki another three points back in fourth.

After his win in race two, Nouet went on a charge in the latter part of the race with moves on Chovet, Arthur Leclerc and de Wilde.