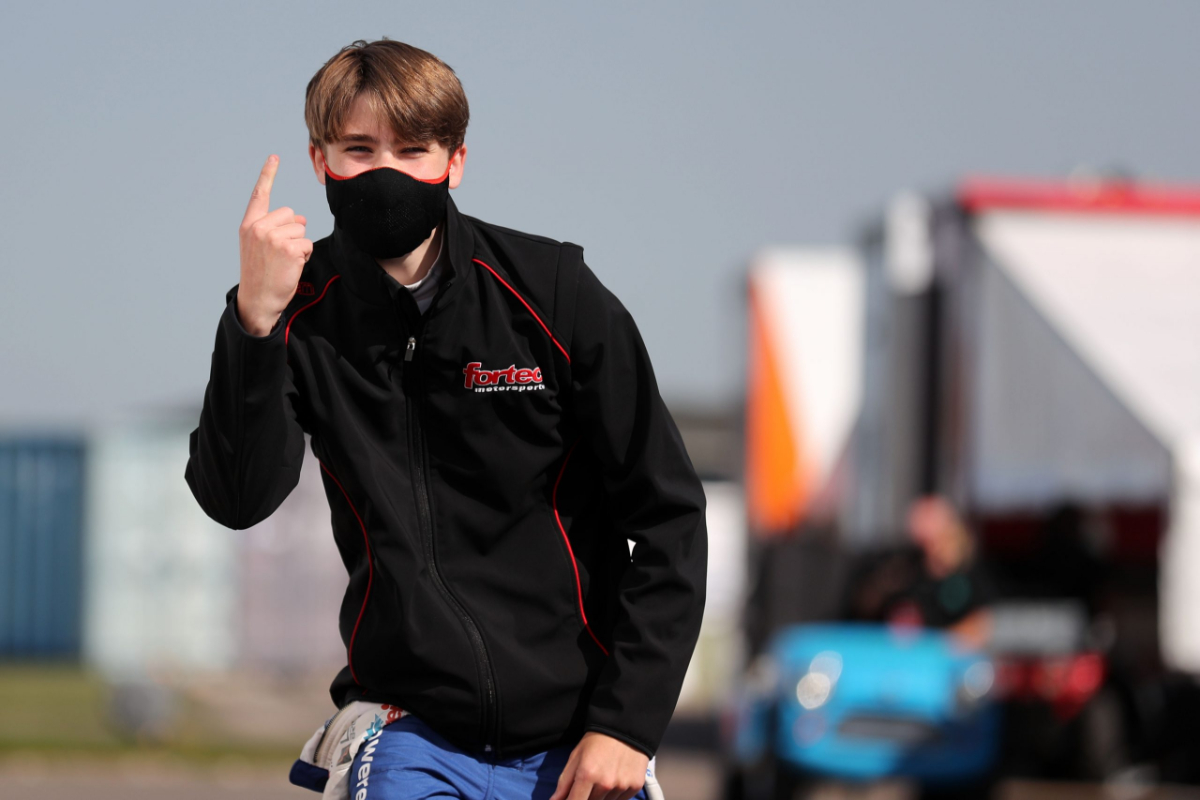 Luke Browning became champion of the Dallara F317-based British Formula 4 iRacing Trophy with a round to spare as Julian Moreno and Roman Bilinski won at a virtual Silverstone.

Pro-Sim class driver Moreno took pole for the first race and was able to open up a sizeable gap to Fortec Motorsports’ Browning and Bilinski – who spent a decent chunk of the first part of the 20-minute race jostling for position.

The opening lap was marred by a large incident further that involved around 10 cars, but all were able to continue utilising iRacing’s fast repair service. Despite that, a handful of cars failed to finish the race in a contest with comparatively high attrition to previous rounds.

At the end of the battle over second, it was 2020 British F4 champion Browning who came out on top.

Moreno was over three seconds ahead, however, and Browning was unable to put pressure on. Despite that, Browning was the highest-placed Pro driver and duly took maximum points in that championship.

Bilinski rounded out the podium but Carlin team-mate Kai Askey charged from mid-pack up to fourth overall and third in class. This left a handful of contenders remaining in title contention, with Browning 61 points ahead with 75 to play for.

Team Fordzilla’s Pablo Lopez, who started on the front row but didn’t start particularly well, and team-mate Anthony Diel rounded out the top three in the Pro-Sim class in fifth and sixth overall.

Arden driver Frederik Lubin was the beneficiary of reversed grid pole for race two, and made the most of it at the start as he left the chaos behind.

Involved in the crashing behind was Browning, who collided with JHR Developments’ Mckenzy Cresswell at Abbey. He used his fast repair, but also pitted at the end of the first tour to repair further damage.

There was additional contact at Stowe and cars were strewen across the circuit.

Out front, Bilinski charged from 20th on the grid to be behind Lubin with a handful of laps to go. The pair battled but a few small errors for Lubin allowed Bilinski to get past his former team-mate and take his first victory.

Despite Bilinski’s pass, Browning getting past Mathias Zagazeta late on for sixth in class allowed him to be in the position to clinch the title before the final round at Brands Hatch.

Lopez also climbed up the race order to take the Pro-Sim class and passed Lubin on the penultimate lap to finish second overall. He opened up the points gap massively to the absent Alex Palou – who is testing in the real world – to 33 points.

NHR e-Sports/Fiercely Forward driver Alex Jonsson was second in the Pro-Sim class ahead of Vulcan Racing’s Leon Penn while JHR’s Nathaniel Hodgkiss rounded out the Pro podium ahead of Askey, Joseph Loake and Browning as Fordzilla’s race one winner Moreno was 12th overall and sixth in class.