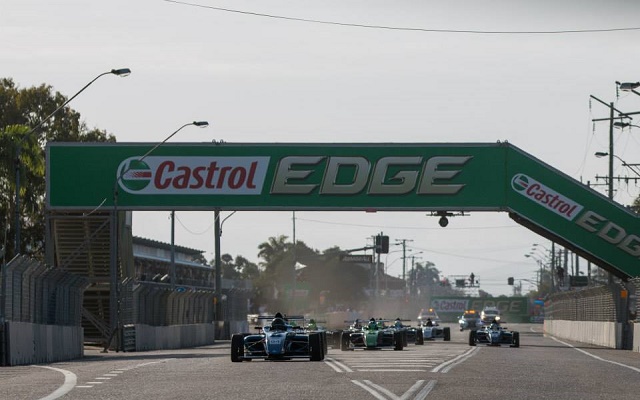 AGI Sport’s William Brown and Team BRM’s Jordan Lloyd took the honours in the two Saturday races of the inaugural Australian F4 round at Townsville.

After locking out both practice sessions and qualifying, Lloyd was the odds-on favorite to become Australian F4’s first-ever winner.

And he duly led off the line, with Brown remaining in second, having inherited the spot on the grid after Thomas Randle was demoted to the back for a technical infringement.

Brown would soon pick up another position as Lloyd missed his braking into T3 on the first lap and could not make the turn, having to go down the escape road and rejoin way down the order.

A safety car period followed when Jordan Love hit the barriers but Brown remained in the lead at the restart and eventually took the win.

Brown’s teammate Nick Rowe, a regular in the Formula Masters China series, propped up an AGI Sport 1-2 and the team was narrowly denied a podium lockout when Luis Leeds passed Jimmy Vernon on the final lap.

Lloyd initially recovered to claim fifth, but a five-second penalty demoted him to tenth, with Randle highest-placed of those moving up.

The penalty also cost Lloyd second place on the reversed grid for race two, with the front row made up by Harry Hayek and Randle.

Hayek came extremely close to jumping the start and compromised his getaway, allowing Randle through – but it was Vernon who led the field after the opening lap.

The second safety car of the weekend then came out for Francesco Maiolo and, a few laps later, he’d also be responsible for third – a mechanical stop accounting for the former and a brush with the barriers for the latter.

What was left was a one-lap dash to the finish line and, in it, Randle sent Vernon into a spin, which saw the latter collected by Zane Goddard.

Randle went on to take the chequered flag, but was penalised post-race, which demoted him to ninth.

Instead it was Lloyd who won, having started tenth, while Rowe and Hayek joined him in the top three.

Race one winner Brown was fourth, with Drew Ridge bringing up the top five.