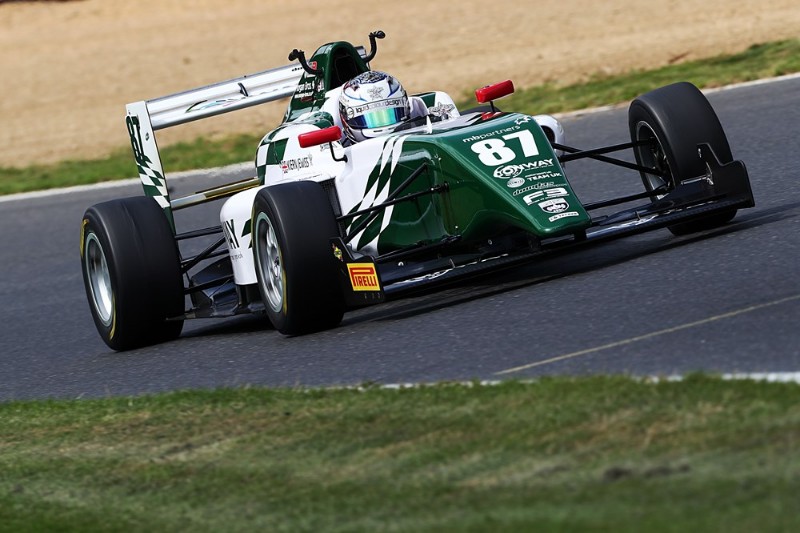 The Douglas Motorsport driver got a good start from the front row and was able to pass Fortec Motorsports’ Hoggard at the first corner.

From the opening lap to the chequered flag Hoggard hounded Jewiss and kept on his tail. However he didn’t have a standout opportunity to retake the lead from Jewiss, who was aiming for his first win a race on from getting his best result of second.

The pair had a gap at the end of the race to Jewiss’ Douglas Motorsport team-mate Ulysse de Pauw, who had been able to pass championship leader Clement Novalak on the opening lap to claim the final podium position.

Novalak finished three-tenths behind De Pauw in fourth while further back his Carlin team-mate Kaylen Frederick came home in fifth place having been able to hold off Chris Dittmann Racing’s Ayrton Simmons.

Simmons himself had risen to sixth from eighth place on the opening lap, with overtakes proving to be difficult during the majority of action throughout the weekend.

Neil Verhagen came home seventh for Double R Racing but had a train of cars consisting if Sasakorn Chaimongkol, Lucas Petersson and Hampus Ericsson within one second of him at the chequered flag.

Ericsson was one of the biggest movers having started in 15th place after he crashed during qualifying on Saturday. He benefitted from Benjamin Pedersen running wide on the opening lap at Sheene and Manuel Maldonado retiring on lap 6 of 14.