Bonifacio, Olsen and Villemi to race for Prema in Eurocup 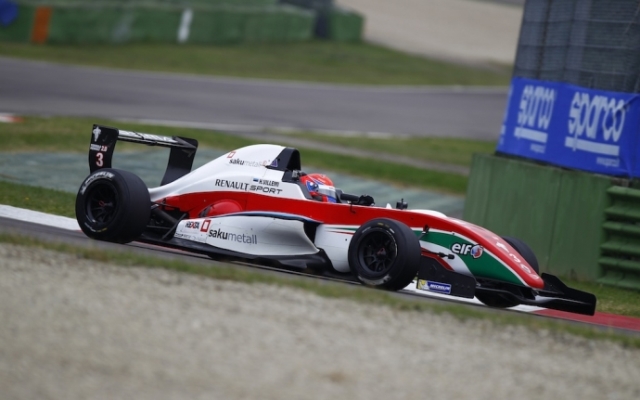 Prema Powerteam have announced a line-up of Bruno Bonifacio, Dennis Olsen and Hans Villemi for this year’s Eurocup Formula Renault.

Bonifacio will be contesting his second season in the Eurocup, and remains with the Prema team he has raced for since 2011. After finishing third in Formula Abarth in 2012, the Brazilian switched to Formula Renault and finished third in the Alps series and 15th in the Eurocup.

“I am very happy to work again with Prema,” said the 19-year-old. “We are in more sync than we’ve ever been and we have common goals for the season.

“We believe that we can fight for the top positions in the championship and we are going to be working very hard, together, to reach our goals. I believe very much in the team and Prema has always believed in my potential. This is our third year working together and I can’t wait to go to the track. Outside of the race track, work has already started.”

Olsen joins Prema after finishing third in the Formula Renault NEC last year for Josef Kaufmann Racing. 2013 was the Norwegian’s rookie season in car racing after an illustrious karting career.

?I?m really happy to join Prema for this Formula Renault 2.0 Eurocup campaign,” said Olsen, 17. “This will be my second year in single-seaters and joining a team of such a history will allow me to learn a lot and show my potential.?

Estonian driver Villemi has been competing in Formula Renault 2.0 since 2011, and switch from his long-time team Koiranen to Prema for the final round of the 2013 Alps campaign, where he finished up seventh in the standings.

?I am very pleased to have the opportunity to work with Prema this year,” said the 18-year-old. “Our winter tests after the 2013 season gave positive and promising results. I feel confident with the team and I believe that we have the tools necessary to achieve podium positions and score good points in the coming season.?

Team manager Grazia Rosin commented: ?Lining up for the European Renault 2.0 season, we decided to rely on some young drivers that also have a good deal of experience. That?s particularly true for Bonifacio and Villemi, who are looking forward to step up and achieve something important in their careers.

“Olsen has less kilometres under his belt but he will definitely become one interesting variable. At his first year in car racing, he already showed he can be a frontrunner as confirmed by his third place in the NEC series.?

Luca Ghiotto finished ninth in last year’s Eurocup for Prema and has since graduated to Formula Renault 3.5 for Draco.