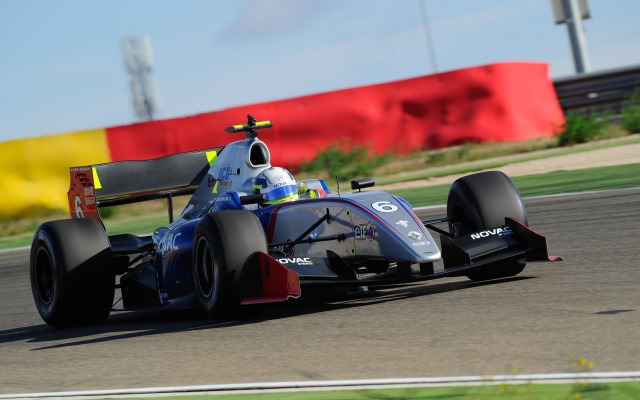 Draco have confirmed that Bruno Bonifacio will race its second car in Formula Renault 3.5 this year, forming an all-Brazilian driver pairing alongside Pietro Fantin.

The 20-year-old makes the step up from Formula Renault 2.0, where he finished fifth in the Eurocup in 2014.

The champion of the Light class of F3 Sudamericana in 2011 with 12 wins from 14 starts, he made his European single-seater debut later that year in Formula Abarth, contesting four rounds with Prema Powerteam. He was a title contender the following year, finishing third in the European series.

With Prema, he moved into FR2.0 towards the end of 2012 before contesting the full season the following year. He finished third in the Alps series with three victories, and was 15th in the Eurocup.

Last year he began the Eurocup season with a win and three other podiums from the first four races to jointly lead the standings with eventual champion Nyck de Vries, but his season then tailed off.

He tested with the Draco FR3.5 squad at the end of the year, and has now completed a deal to race for the team in his rookie season in the category. He joins compatriot Fantin, who stays on for a second campaign with the Italian-based squad owned by Brazilian Guto Negrao, father of former Draco driver Andre.

“You cannot imagine my happiness in having successfully concluded negotiations with the Draco to race in Formula Renault 3.5,” said Bonifacio.

“I never had any doubt that this would be the category and the team for me this year and I have done everything possible to make it happen.

“After the tests at Jerez and Alcaniz my belief in the team was confirmed. After a winter in which I trained hard in Brazil, I’m ready for this new and certainly not easy adventure, and I hope to repay the trust with many good results for Draco. “

Negrao added: “I have followed the career of Bruno’s for many years and I have always appreciated his qualities.

“Now that he has matured, I am happy to be able to deploy him in my team in a category as important and competitive as FR3.5.

“Alongside his experienced compatriot Pietro Fantin, who will face his third season in the series, Bonifacio will have a chance to mature properly by having a valuable reference.

“For the first time we are entirely Brazilian and that makes me proud. Being able to help drivers from my country is always a source of satisfaction. Now we just have to collect the desired results and wave our flag on the podium as often as possible.”