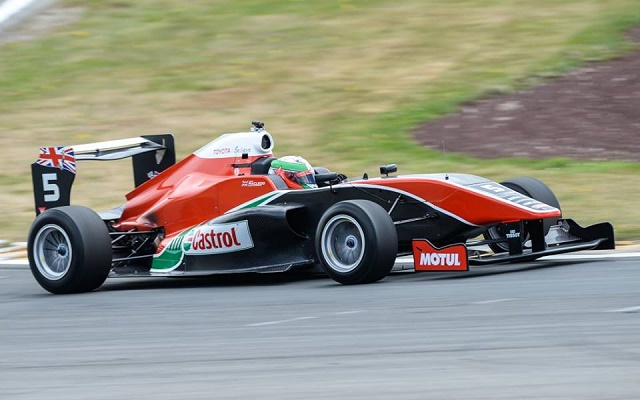 Giles Motorsport’s Sam MacLeod, who occupies fifth in the Toyota Racing Series standings, emerged as the pacesetter in Friday practice for the final round of the championship at Manfeild.

MacLeod vaulted to the top of the timesheets in the closing seconds of the final session, becoming the only driver to dip below 1:02s.

In session one, championship contender Arjun Maini held the lead halfway through, before being demoted by fellow challenger Brandon Maisano.

The Indian then got within a hundredth of a second of Maisano’s time before securing the top spot with five minutes to go, leaving the Frenchman in second place.

MacLeod was third, while Thursday’s quickest man Santino Ferrucci moved up to fourth late in the session.

Maisano took the reigns early on in the second practice and, while Eastwood briefly overtook him at halfway point, the Frenchman improved to take first back. He then went even quicker, beating Maini’s time from session one.

Jamie Conroy went off in the gravel at Pepsi corner with a minute to go, bringing out the session-ending red flag.

Thomas Randle ended up second, three tenths behind Maisano and narrowly ahead of Eastwood. Stroll moved up to fourth, with Ferrer again finishing fifth.

The first minutes of the final session were led by Giles teammates Ferrucci and Munro, but, at halfway point, the everpresent Maisano was back to the lead.

Ilott moved up to first in the final minutes and then Randle brought out the red flag, going off in the very same Pepsi turn.

But the session did restart, allowing Maisano to beat his earlier best time of the day with a late effort. However, under the checkered flag, MacLeod went one better, moving out of the 1:02s.

The Giles driver ended up leading Maisano and Maini, with Sette Camara and Ilott completing the top five.

Mathias Kristensen picked up sixth, narrowly ahead of Ferrer, with Ferrucci, Munro and Randle making up the rest of the top ten.