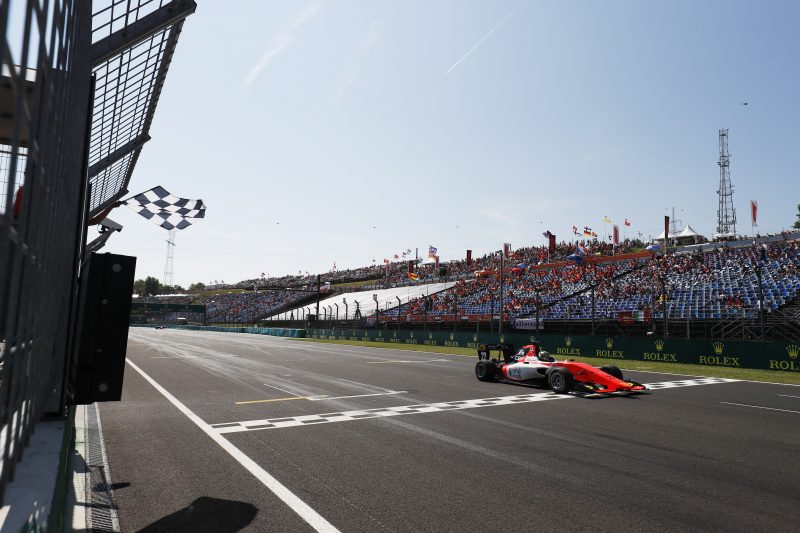 Boccolacci successfully defended pole position into the Turn 1 on the opening lap and proceeded to quickly build a lead over the chasing pack. By lap three of 17, he was 2.4 seconds clear of second place Ilott.

This gap was later extended to nearly six seconds and while Ilott reeled in the MP Motorsport driver in the closing laps, Boccolacci was able to cruise to a comfortable maiden win.

Boccolacci had previously crossed the line first in GP3, winning the feature race at Paul Ricard in June. However he was later disqualified from the results for a tyre pressure infringement.

Second-placed Ilott made his progress on the opening lap. Starting from third, he attempted a move around the outside of Juan Manuel Correa at Turn 1. Forced wide and onto the run-off area along with Correa, Ilott used superior traction to power past the Jenzer Motorsport driver, who then lost out on third place to Anthoine Hubert one corner later.

Championship leader Hubert’s start propelled him from sixth on the grid to third on the opening lap. The ART Grand Prix driver was unable to challenge team-mate Ilott during the race.

Campos Racing’s Leonardo Pulcini ended up fourth. He performed an almost identical move to Hubert on Correa at Turn 2, demoting the Jenzer driver to fifth place halfway through the race.

Correa spent the closing stages defending from the Trident pairing David Beckmann and Ryan Tveter. Attempting a late-braking move at Turn 1, Beckmann tagged the rear of Correa’s car at one point. The two avoided damage in the incident, but Beckmann used his final DRS allowance in the failed attempt. This left him exposed to Tveter late-on.

Tveter was able to swoop around the outside of Beckmann at Turn 1 to secure sixth place, while Beckmann – on his first weekend with the team after moving from Jenzer – had to settle for seventh.

Tatiana Calderon scored her first point of the season, guiding her Jenzer-prepared car to eighth place. She demoted Campos’s Diego Menchaca, who had occupied eighth position for most of the race, in the closing stages.

Race one winner Nikita Mazepin was anonymous throughout. After running wide at Turn 1 on the opening lap, he slipped from eighth on the grid to 10th place early on. After being passed by Pedro Piquet and Simo Laaksonen as the race unfolded, he finished in 12th.