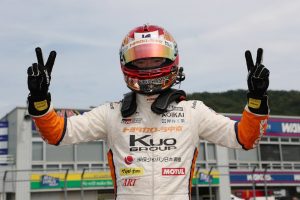 TOM’s team-mates Sho Tsuboi and Ritomo Miyata moved further ahead at the top of the Japanese Formula 3 standings at Okayama.

Both drivers took a win and a second, with championship leader Tsuboi earning two more points than his team-mate as a result of taking pole and fastest lap in the second race.

Miyata took his second pole of the season in the first qualifying session, where he felt far more confident than Tsuboi.

In the race he was also more confident off the line, which was slightly damp, heading his team-mate into the first corner as second row man Sena Sakaguchi stalled.

Yoshiaki Katayama rose from fifth to third, but was then handed a drive-through penalty for jumping the start, gifting ThreeBond’s Ukyo Sasahara the final podium position.

Sasahara had already built an advantage to what was then fifth place, and after being promoted to third he has an easy run to the flag.

Tsuboi could not match Miyata up front, who extended his lead out to 2.34 seconds to take his second straight victory after winning race two at Fuji.

Katayama could only recover to a pointless seventh after his penalty.

With Typhoon Jongdari approaching, the second race was brought forward, with Tsuboi beating Miyata to pole.

Tsuboi held off the first corner challenge, and was several car lengths ahead by the end of the first lap.

In similar vein to the first race, the gap between the TOM’S team-mates slowly eked out, with Tsuboi eventually finishing 1.5s ahead. Getting pole and fastest lap meant his championship lead now stands at 28 points, a difficult but not insurmountable gap.

Toshiki Oyu, who was another to get penalised in the first race, this time drove cleanly to take his second podium finish of the season.

He was immediately distanced by the top two, and had contant pressure from behind through Sakaguchi and Katayama.

Kanamaru also had a close battle for the final point, just beating Sasahara.

The arrival of the typhoon meant the third race was cancelled. The championship will reach its halfway stage after the next race at Motegi.