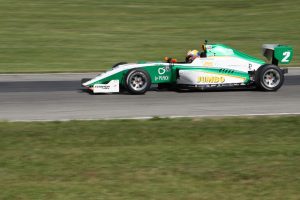 Rinus VeeKay moved into the lead of the Pro Mazda standings with an assured victory in the first race at Mid-Ohio.

The Juncos Racing driver led from lights to flag to take his third consecutive win and his fifth of the season.

BN Racing’s David Malukas spent the entirety of the race in second, unable to get close enough to VeeKay to challenge for the lead but safely ahead of Robert Megennis in third place.

When Malukas did up his pace in the second half of the race, VeeKay immediately responded, extending his lead by almost a second in two laps and setting a new lap record.

Megennis looked like he’d lose the final podium spot to Juncos team-mate Carlos Cunha? after the Brazilian started setting some rapid laps in pursuit of third late in the race. Megennis did enough though, taking the position by four tenths of a second.

Reigning USF2000 champion Oliver Askew kept himself on the brink of the title battle in sixth, ahead of RP Motorsport team-mates and championship debutants Felipe Drugovich and Mathias Soler-Obel.

Ninth place for Sting Ray Robb was an impressive result after the Team Pelfrey driver span on the first lap. He made more overtakes than anybody else, although could not finish higher after getting stuck behind Kris Wright for several laps.