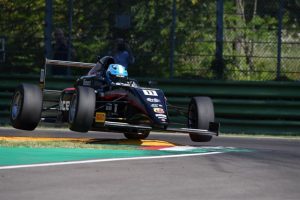 The pole sitter came under pressure from Prema?s Olli Caldwell on a number of occasions, but drove a faultless race to take his second win of the weekend and extend his championship lead over third place finisher Enzo Fittipaldi.

The first safety car came midway through race, when William Alatalo ran through the gravel and span across the track before coming to a stop. Those running behind were forced to take evasive action, with a number of drivers coming close to the stranded Mucke Motorsport driver.

Alatalo managed to get going again before the safety car could pick up the leaders, and racing was soon back under way.

Lorandi, Caldwell, and Fittipaldi quickly pulled away from the rest of the field, as they had done in the first part of the race, while Federico Malvestiti battled to keep Petr Ptacek behind him.

Lorandi was once again starting to distance himself from the two Prema drivers when the safety car was brought out again, this time to recover Gregoire Saucy, who ended a disappointing race in the gravel.

Saucy had already lost a number of positions when he ran wide on two separate occasions. He was starting to work his way back up through the field when another car clipped his rear wheel and he was sent spinning into the gravel.

With two minutes on the clock, Lorandi bunched up the field to restart the race again. He was unable to shake the Prema duo, but Caldwell ran out of time before he could make a move for the lead.

Lorandi finished just 0.769 seconds ahead of Caldwell, with Fittipaldi a further 0.653s behind. A second victory means the Bhaitech driver is now 25 points ahead of Fittipaldi in the championship standings heading into the final race of the weekend.

Malvestiti managed to hold onto fourth ahead of Ptacek.

Niklas Krutten managed a solid race to climb up to eighth, ahead of Ian Rodriguez and Giorgio Carrara.