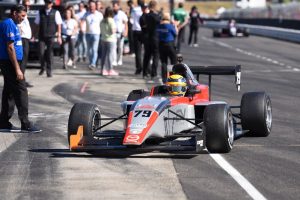 BN Racing will expand into Indy Lights in 2019, little under two years since it first entered USF2000.

The Chicago-based team, led by Englishman Bryn Nuttall, joined the Mazda Road to Indy ladder in 2017 for a part season in USF2000. Their main driver David Malukas finished 10th in the standings, with a podium coming in the team’s third race.

Nuttall has an extensive motorsport background, having worked in engineering, management and coaching across the globe.

With the new-for-2018 Pro Mazda having the same underpinnings as the USF2000 car, BN Racing opted to run a expanded two car setup in USF2000, as well as a three car Pro Mazda squad. Malukas [pictured above] finished fourth in Pro Mazda with three wins, with one-off team-mate Toby Sowery also appearing on the podium.

For 2019, the team plans to continue the existing Pro Mazda and USF2000 operations, and run at least one Indy Lights car. Having led their line-up for two years, soon-to-be 17-year-old Malukas is favourite to drive the car, although the render of what the team’s car would look like carried the #78 number used by Kris Wright and Sowery this year, the latter who has ruled out an immediate full-time return to single-seaters. Driver and testing plans will be revealed in the coming weeks.

?I?m delighted to be able to announce we will enter the 2019 Indy Lights championship and complete the team?s ability to offer all three categories of these outstanding racing series operated by Andersen Promotions,? said Nuttall.

?Not only is this a key step in moving forward as a racing team but with the extra personnel coming in, this will also strengthen my already established USF2000 and Pro Mazda teams, which is a very critical point for me. My aim is to have the capability of winning in every series we enter.

?I?m under no illusions on how tough 2019 in Indy Lights is going to be, but we?ve shown many times over the last 18 months what we are capable of, so let?s see what happens when March arrives.?