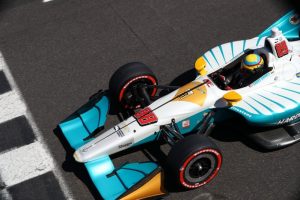 Indy Lights champion Patricio O’Ward and runner-up Colton Herta will make their IndyCar debuts with Harding Racing in the 2018 championship decider at Sonoma in just under two weeks time.

Both drivers drove for Andretti Autosport in Indy Lights this year, although Herta’s entry was run as Andretti Steinbrenner Racing. Andretti’s IndyCar team has multiple links with Harding, and also has a partnership with Andretti-Herta Autosport, an IndyCar team run by Colton’s dad Bryan.

Harding was set up in 2017, making its IndyCar debut at the Indianapolis 500 with 2014 Indy Lights champion Gabby Chaves [pictured above]. The team also ran at the Texas and Pocono ovals with the Colombian, where he finished fifth and 15th. One car has been entered for every race so far this season, with 2013 GP3 title contender Conor Daly deputising for Chaves at three races.

The team will fulfil its longstanding ambition to run two cars at Sonoma, with Chaves being benched once again.

“I’m super, super excited for my IndyCar debut. We had such a great year in the Indy Lights car, and some of the people that were with me in Lights are moving up to help me in IndyCar,” O’Ward told Formula Scout.

“It’s going to be cool to feel at home [immediately]. It’s going to be a new experience. I’ve honestly never done a race at Sonoma, and now we’ve got pitstops, fuel strategy and all that kind of stuff. But I’m really, really, really excited. I’m testing tomorrow in the IndyCar, and then racing next weekend for the season finale. I think we’re going to be fast, and hopefully get a nice result on my debut.”

Herta has already made his IndyCar test debut with the team, whereas Thursday’s Sonoma test will be O’Ward’s first taste of IndyCar machinery. The Mexican is guaranteed at least three IndyCar starts next year, including the Indy 500, as part of the $1 million scholarship he received for winning the Indy Lights title.

Harding team boss Brian Barnhart aims to run two cars full-time next season, and has not ruled out continuing with the all-rookie combination, but told?Autosport that the focus is on the Sonoma race before 2019 plans are formed.