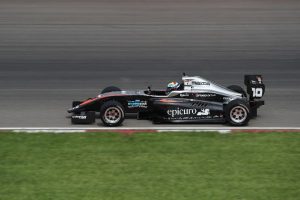 RP Motorsport has explained why it missed the Pro Mazda season finale at Portland, which attracted a grid of only eight cars.

“We were not in the fight for the title, and this race was super far away from the workshop for most of the teams, and one of our drivers was unavailable because they had something clashing in their schedule,” Carlo Sterrantino, RP Motorsport’s Pro Mazda team coordinator, told Formula Scout.

“It also clashed with Euroformula Open at Silverstone, so we preferred not to go. If we were fighting for the title, we would?ve been there for sure.”

RP Motorsport ran five drivers in total, with Scott leading taking two wins and a pole. A scary crash at Toronto meant he missed the Mid-Ohio round as well as Portland, and he slipped to eighth in the standings. The team finished fifth out of eight.

“You need experience, but I think we showed good performance, including wins since the beginning of the season. We almost won at St. Petersburg, and almost twice at Indianapolis. But we’ve been involved in many crashes, most of the time not our fault, which dropped us down the standings.

“Most of the people involved in the World Series team last year went to Pro Mazda this season. The car is not so difficult to engineer because it’s very limited in what you can do on it. But the challenge was all the rest. Everything was new. The way of thinking, behaving and race direction is very different.?

“Oval circuits, the tyres for ovals, oval strategies, new tracks everywhere. Sometimes you will go with no testing at all, so you have to gather lots of data in the weekends. Most of the times it was not so difficult to be on the lead [pace].?There are many things we learned, which will be useful for the future.”

“Harrison was quick from the beginning. We improved the car a lot since the first Lucas Oil [oval] race, and that?s why Harrison took pole at Gateway. Unfortunately the first laps in the race, the grip was probably not the best on track and he lost a couple of positions.

“We would like to expand to Indy Lights, of course, because one of the most attractive parts of this category is the possibility to win, and if you win you get a lot of money to be spent on the next step, which at the moment is Indy Lights. But I don?t know what?s going on with Indy Lights next year. We went to America, we invested time and money on the category, and we are interested in Indy Lights for the future.”