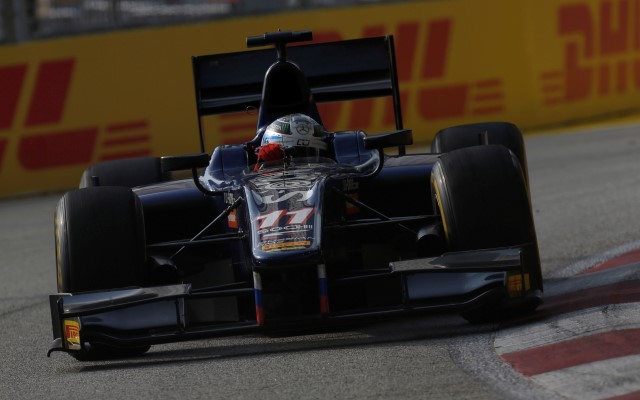 Sam Bird will go to the GP2 Series finale in Abu Dhabi seven points behind championship leader Fabio Leimer after claiming a controlled lights-to-flag win in the Singapore sprint race.

Bird made a good start from pole position and held a comfortable advantage over second-placed Marcus Ericsson for the distance, opening up a 5.7 second lead by the chequered flag.

Ericsson finished second with Leimer in third, maintaining the points gap he had when he arrived in Singapore. The Swiss driver had a bizarre scare after the chequered flag however when he collided with Alexander Rossi. The American, who finished a lap down, made a sharp left turn across the track into the support paddock and was hit by Leimer, who was driving around to the pits for the podium ceremony.

Stephane Richelmi spent the race in fourth while Jon Lancaster worked his way up to fifth after starting ninth. Johnny Cecotto finished a remote sixth with Daniel De Jong in seventh, narrowly ahead of Adrian Quaife-Hobbs, who started 22nd.

Feature race podium finishers Jolyon Palmer, Felipe Nasr and James Calado all finished down the order having had to pit to change off the tyres they had to start on. After running a prime-prime strategy on Saturday, the Carlin pair started on option tyres and Calado on worn rear primes.

Update: Calado was handed a 20 second penalty for forcing Sergio Canamasas into the wall on lap three, dropping him one place from 19th to 20th.

Iaquinta wins race one at Misano amidst problems for poleman Rovera