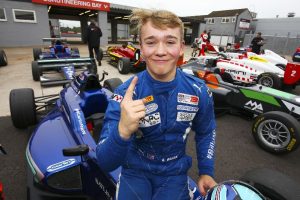 The Donington Park round, the penultimate of the season, was Monger’s first race weekend at the circuit since his life-changing crash in a British Formula 4 race last year that led to him becoming a double amputee below the knees.

After being quick during free practice in wet conditions, Monger claimed pole position on a damp track by 0.173 seconds over his Carlin team-mate Nicolai Kjaergaard.

For Monger it proves that he can be competitive in lap times using hand controls compared to his British F3 rivals, who use a traditional foot-operated system for the throttle, brake and clutch,?and puts the achievement as one of his highlights of the season.

?The podium at Oulton Park was really good because that was my first race back,? Monger told Formula Scout. ?Obviously getting another podium at Spa [was a highlight].

?But I think the pole position was a great achievement for me, to show that I can beat guys with hand controls, especially in terms of lap time.

?The last three qualifying sessions I?ve been within two-tenths of pole and the margin was getting less and less each time.?So to get pole now for me was a great start to the Donington weekend because it shows that we?re making progress.?

Monger lost the lead in the opening race to Kjaergaard, falling down to sixth after putting all four wheels off track early on. He recovered to take fourth. In the reversed grid second race he lost his nosecone and was forced to pit, but responded by setting fastest lap, putting him on pole for the finale.

A lap two mistake lost Monger the lead, but he went on to take his third podium of the season, something he saw as?a sign of the progress that has been made over the last few rounds of the championship.