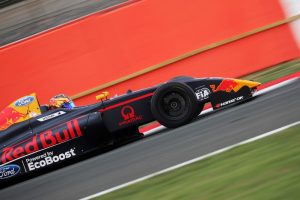 Red Bull Junior Team members Dennis Hauger and Jack Doohan are unaware if they will be retained by Red Bull next year despite winning rookie seasons in British Formula 4.

Hauger and Doohan finished one point apart in British F4 this year, with Hauger taking fourth in the standings. Doohan got one back on his Arden team-mate with the Rookie Cup title, of which he was class winner on 12 occasions.

The last Red Bull Junior Team member to be placed in British F4 was Australian Luis Leeds, who was dropped at the end of his first season, having finished third in the standings with three wins. Hauger and Doohan have four and three wins respectively this year.

“From where I was at Brands Hatch Indy [the season opener] to when I?m back at Brands Grand Prix [the season closer], we?ve gone back a little bit,” Doohan explained to Formula Scout. “But as a driver I felt I?ve progressed a lot more.

“We?ve got everything sorted in techniques. Obviously last weekend we?re not really at the level of my other team-mate [Seb Priaulx] who put it on pole. But every other circuit we seem to be improving, getting better and better.

“Now it?s just the little things. Coming back here, no testing, it?s been difficult. I don?t think it shows our true performance.”

Neither Hauger or Doohan managed better than seventh at Brands Hatch, although Hauger’s third race was compromised when JHR Developments driver Manuel Sulaiman ploughed him into the gravel at Paddock Hill Bend.

“Nothing?s came back yet from Red Bull, which is the main source of what?s happening next year,” continued Doohan.

Hauger has previously referred to Dr Helmut Marko, the head of the Red Bull Junior Team, as “a man who knows everything but doesn?t say too much”.

Red Bull also has two drivers in karting: Britons Harry Thompson and Jonny Edgar. Thompson finished second in the CIK-FIA European Karting Championship this year in the top OK Class, while Edgar came 14th in the World Championship. Edgar will be 15 in time for the start of the 2019 season, meaning he could step into most entry level single-seater series.

Thompson does not turn 15 until August, meaning his single-seater options are initially limited to the likes of French and Danish F4 and several club championships in America. A proven alternative is Ginetta Junior, where Lando Norris and this year’s British F4 champion started their car racing careers.