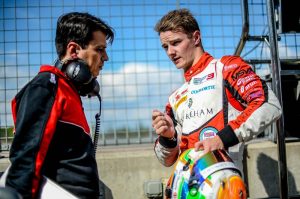 Hingeley stepped up to car racing in 2015, winning the Formula Jedi title before moving up to British F3. In two seasons in the championship he won four times, and finished third in the standings last year.

The 20-year-old Welshman also gained experience of Dallara F3 machinery (as opposed to the Tatuus-built chassis used in Britain) by entering the final four rounds of Euroformula Open and taking two top-five finishes.

He has since tested in GP3 with Jenzer Motorsport, and on several occasions with Hitech in their European F3 car. He will join Ahmed and Alex Palou as the third confirmed driver at the team for this season.

“We are really happy to welcome Ben to the team – he was a worthy adversary with Enaam in British F3.,” said Hitech team director Oliver Oakes.

“His recent GP3 tests in Abu Dhabi and the recent tests with us in F3 were very impressive and made us confident in his making the step up to FIA F3 for 2018.”

“Hitech are an exceptionally professional team in the way they work and operate and I?m really delighted to be working with them this year.”