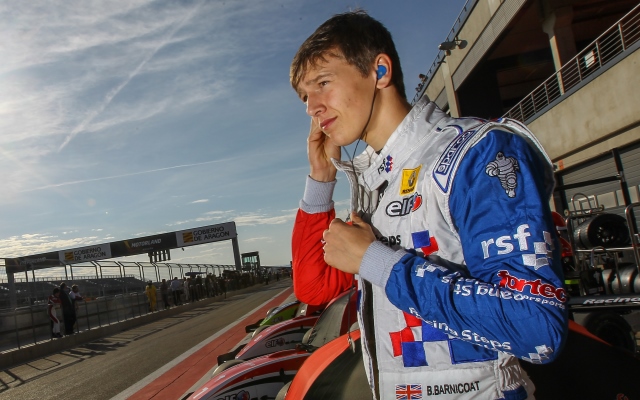 Ben Barnicoat has signed with HitechGP for his rookie season in the FIA Formula 3 European Championship.

The Racing Steps Foundation protege had at one stage been expected to join Prema but his deal to join the Italian team fell through.

Barnicoat was Formula Renault 2.0 NEC champion in his first season out of karts in 2014 and then finished fourth in the Eurocup last year.

“I can’t wait to start testing in earnest,” he said.

“It’s been a bit of a wait while contractual matters have been sorted but I couldn’t be happier. Hitech is a top team which has everything in place to succeed.

“Obviously I’ll be on a steep learning curve and up against a really strong and experienced team-mate in George Russell. But my gut feeling is I’m in exactly the right place to serve my F3 apprenticeship.”

RSF co-ordinator Derek Walters commented: “The team, new as it is, has impressive credentials and deep-seated F3
knowhow thanks in large part to the backing it is receiving from AOTech, the joint venture between ART Grand Prix and OAK Racing.

“The technical tie-up places world-class aero, CFD, simulator and engineering resources at Hitech’s disposal and, unsurprisingly, was an important factor in the decision-making process.

“We were also impressed by the team’s out-and-out professionalism, its close attention to driver wellbeing and the fact that in only its second preparatory run-out at Hockenheim last year it claimed two top-five finishes.”

Team owner Oliver Oakes added: “We are extremely happy to confirm Ben as part of our FIA F3 line up.

“We evaluated several drivers for the seat towards the end of last year and Ben impressed us immediately in Jerez.

“Ben was straight on the pace of the experienced drivers and his technical feedback was impressive for a driver new to Formula 3.

“Whilst he may be a rookie to Formula 3 his pedigree from karting and his results in Formula Renault over the past two years shows what we can expect from him over the course of this season.”