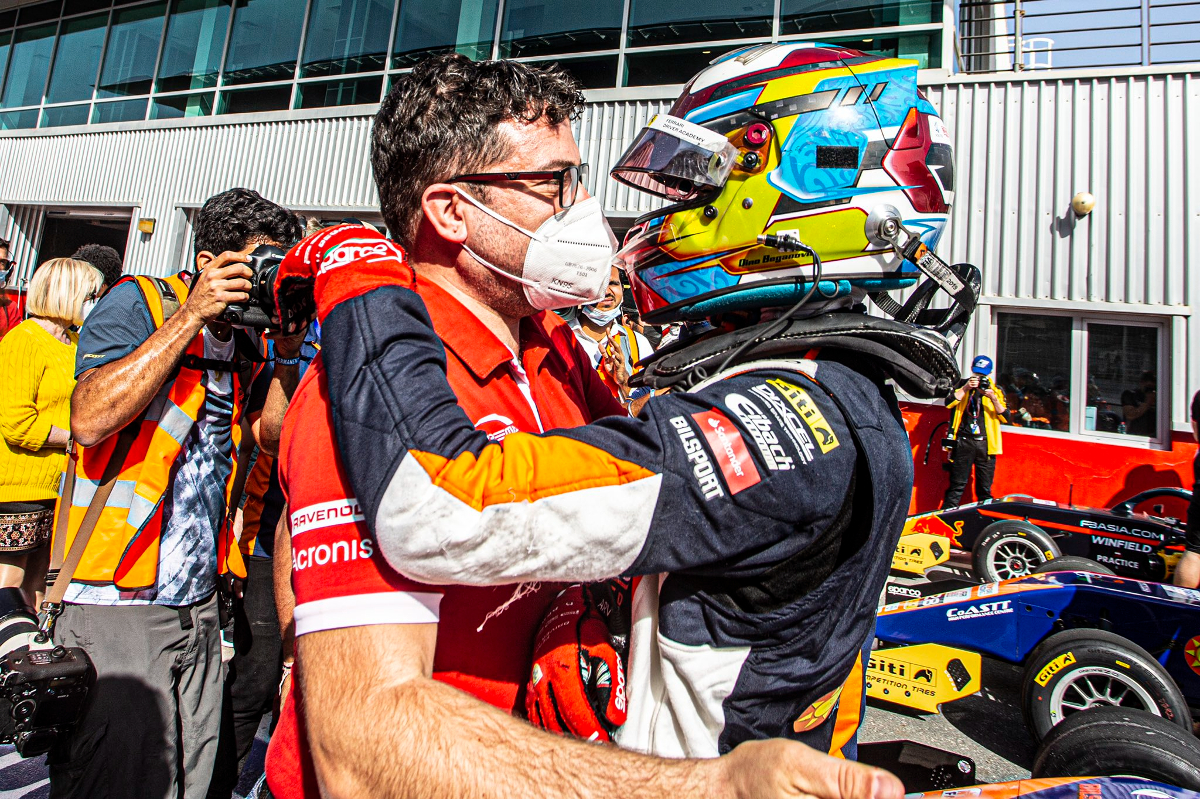 The front row starters got away confidently, with Michael Belov and Leonardo Fornaroli racing wheel-to-wheel into the first corner. Dilano van’t Hoff also had a strong start and had passed Pierre-Louis Chovet and Fornaroli to end lap one in second.

Ferrari junior Beganovic had an exceptionally strong start, passing Isack Hadjar and Pepe Marti as Paul Aron spun. That lifted him to fourth, and going down the inside of Fornaroli then put the Mumbai Falcons driver on the podium.

The top three of Belov, van’t Hoff and Beganovic stayed close at first, with Beganoic attempting a pass into the first corner on lap seven of 16 but van’t Hoff was able to hold on in the slipstream of Belov in front.

Beganovic attempted the move once again a lap later but switched to the outside of Van’t Hoff, holding the line and taking the position in spectacular fashion. He was quickly on the tail of Belov, who went wide and allowed Beganovic to set up a move down the pit straight.

Belov defended on the inside with Beganovic locking up into turn one, but when Belov went wide once more it meant Beganovic could sweep around the outside of the Evans GP driver to take the lead.

Arthur Leclerc and Marti had been battling behind on the same laps, with Ferrari junior Leclerc passing Marti on the outside of Marti of turn one and then taking fourth from Fornaroli later around the same lap.

Marti was put into battle behind with Lorenzo Fluxa and Isack Hadjar, and then Fornaroli, who was lacking pace, dropped into their clutches too. Leclerc escaped them and started battling van’t Hoff, eventually taking third from him down the pit straight while his Mumbai Falcons team-mate Beganovic romped away up front.

That move settled the podium order, while last-lap trouble for van’t Hoff dropped him to sixth, Fornaroli was classified a lap down as he was spun with one tour to go, and Pierre-Louis Chovet had a five-second penalty due to a start infringement that meant he was classified 10th.

Paul Aron was hit into a spin on the first lap and dropped to 18th, tangled with Abu Dhabi Racing by Prema team-mate Hamda Al Qubaisi and finished 15th in a dramatic race, while other team-mate Jak Crawford finished just behind Fluxa and van’t Hoff in seventh.