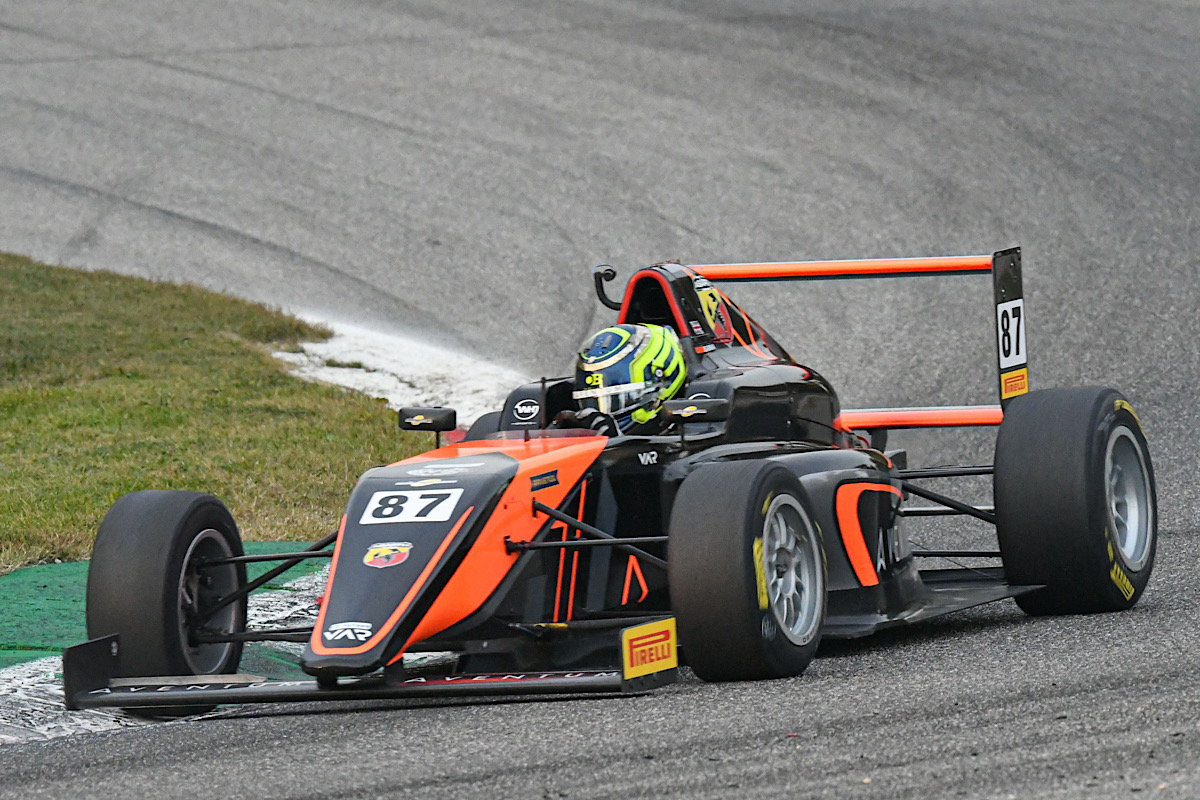 Ollie Bearman emerged victorious from a thrilling race-long battle at Monza in the first Italian Formula 4 race of the final weekend.

The Van Amersfoort driver, who had wrapped up the championship at the previous event in Mugello, took the lead with an audacious move into the first chicane on the last lap as four cars battled for the lead.

Antonelli had tried an even wilder move into the chicane on the last lap, but locked up and was forced to cut the chicane, ceding position to Bearman through Curva Grande. Nevertheless, Antonelli was clearly delighted with the result punching the air as he crossed the line.

The turning point of the race came on lap 13 as Bearman – who missed Thursday’s pre-event test – made a move for the lead on long-time race leader, Lorenzo Patrese.

Bearman pulled alongside on the straight, briefly putting two wheels onto the grass before taking the inside line at the chicane.

In defending Patrese briefly locked up and ran wide but as he rejoined there was contact between him and Bearman, with Patrese running off into the gravel on the outside of the Curva Grande.

The incident between Bearman and Patrese is under investigation by the stewards.

The leader going into the last lap had actually been Mucke Motorsports, Joshua Duerksen, double winner at Mugello, who took advantage of the coming-together between Patrese and Bearman to slip through into the lead.

With Bearman and Antonelli squeezing past on the last lap, Duerksen had to settle for third place on the podium.

Patrese, who had started from pole position, lost out to Bearman at the start but was clearly quicker in the early stages and took the lead into the Roggia chicane on lap 2.

With his father, six-time GP winner Riccardo Patrese watching on impassively in the pits, he quickly pulled out a comfortable gap ahead of the following pack, despite being twice pegged back as the safety car was deployed for incidents on track.

For most of the race, a group comprising Bearman, Tim Tramnitz, Duerksen and Antonelli had exchanged positions regularly in a typical Monza slipstreamer. Tramnitz made a number of attempts on Bearman, the two passing and repassing, before being joined after the final safety car by Antonelli and Duerksen.

Tramnitz eventually came home fourth, ahead of Prema Powerteam’s Sebastian Montoya. Starting 16th after a 12-place grid penalty, Montoya ran at the head of a second group just behind the leaders but as the leaders exchanged positions he was able to close up onto their tails, together with his team-mate Kirill Smal – who started 22nd and finished sixth.

Feed Racing shootout winner Robert de Haan finished his debut race in F4 in the gravel at the first chicane after a collision on lap 8.