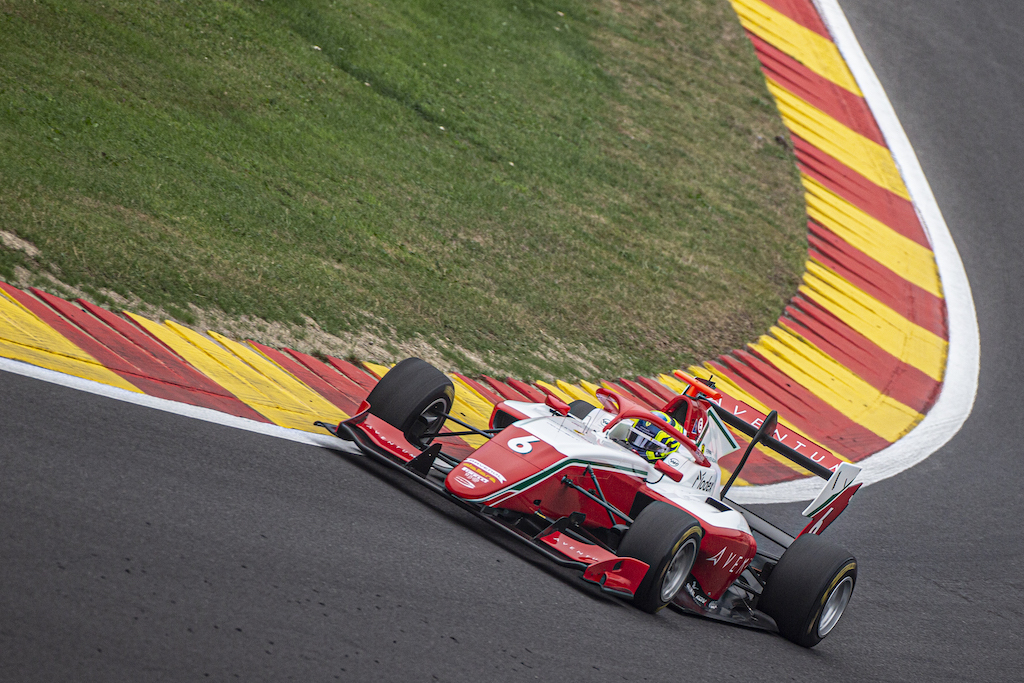 Ollie Bearman boosted his FIA Formula 3 Championship title hopes with a maiden victory in the sprint race at Spa-Francorchamps, which was red-flagged following a big crash.

Starting fifth on the grid, Bearman was the beneficiary of chaos at Les Combes on the first lap as Juan Manuel Correa slipstreamed past polesitter Zak O’Sullivan for the lead but was then tagged by his rival when he turned in, sustaining an immediate puncture.

Brad Benavides took to the run-off in avoidance and rejoined in the lead, which would later earn him a five-second penalty that would then be rescinded. O’Sullivan briefly took the lead back from his Carlin team-mate before dropping down the order and pitting with front wing damage.

Prema’s Ferrari junior Bearman took the lead from Benavides into Les Combes on lap two, where a safety car was triggered when Christian Mansell was sent into the gravel by contact from Rafael Villagomez.

The safety car was needed again within a lap of the restart after Zane Maloney collided with Oliver Goethe fighting over sixth place at Blanchimont. The contact sent both through the new gravel trap on the outside and into the barriers, and Maloney’s car was hit again by Goethe’s while he was upside down mid-roll.

Both drivers were able to climb out unaided, but the race was red-flagged so the barriers could be fixed.

At the restart around half an hour later with six laps left, Bearman was able to escape out front ahead of the battling Benavides and Jonny Edgar, who also picked up a five-second penalty for tipping Franco Colapinto into a spin in the Les Combes start scramble.

Edgar crossed the finish in second but was denied a first F3 podium with Roman Stanek beating Alexander Smolyar to second.

Arthur Leclerc charged from 20th on the grid to finish fifth, making up five places in as many laps after the restart.

The other championship challengers who started near the rear of the grid also made good progress, with Isack Hadjar going from 23rd to ninth to open up a two-point lead in the standings over Victor Martins.

Martins started 24th and got ahead of Hadjar on the opening lap before receiving contact at Les Combes, but it was a drive-through penalty for a jump start that ended his hopes of points.

Jak Crawford almost scored a point from 30th and last on the grid but had to settle for 11th behind qualifying winner Caio Collet.