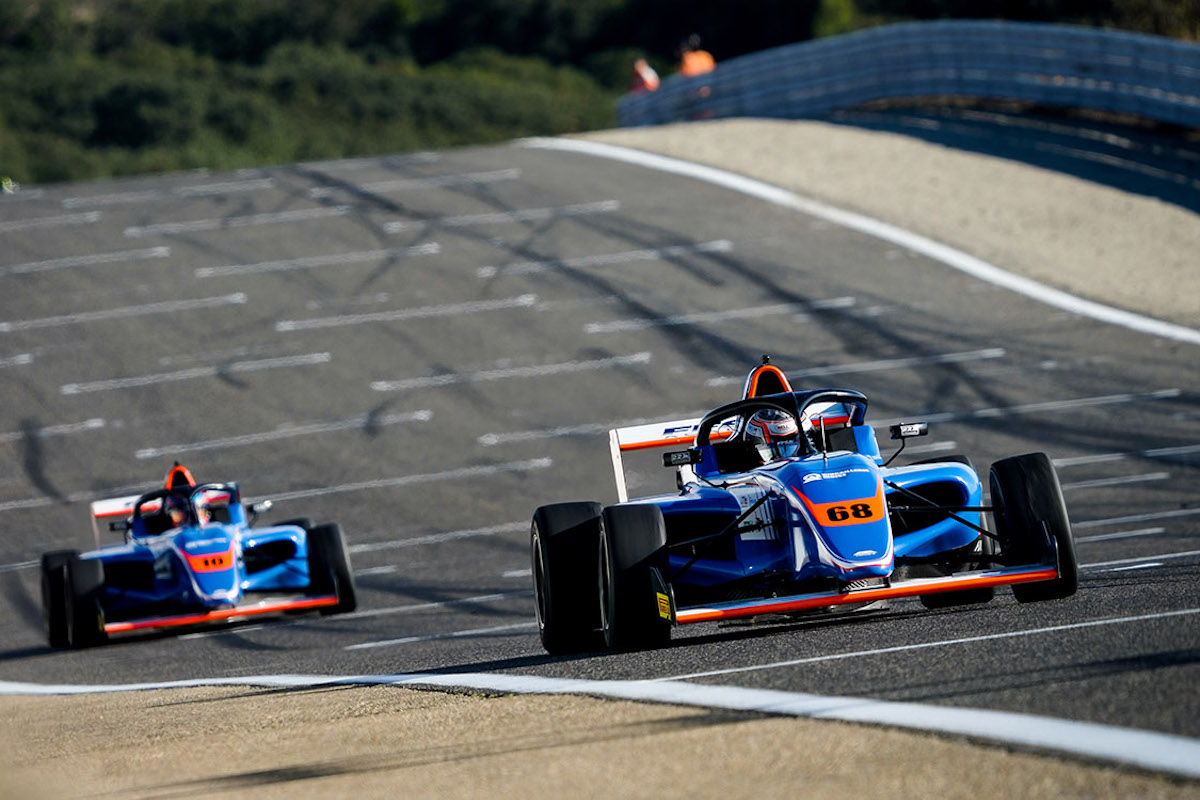 Hugh Barter claimed victory in the first French Formula 4 race of the weekend at Valencia, but Alessandro Giusti scored full points after finishing in second place.

Barter is ineligible to score points this weekend due to having competed at the same track in Spanish F4 earlier in the year. Thus, Giusti is awarded the points of the winner. He also set second-fastest lap behind Barter but says he does not inherit the point, and is therefore now one point behind his rival at the top of the standings.

The start of the race had to be slightly delayed due to an incident in the formation lap. Lorens Lecertua hit the wall of the main straight as he tried to avoid Pierre-Alexandre Provost while them both warmed up his tyres.

Pole-sitter Giusti led the way into turn one, where several cars ran wide and off the track. Edgar Pierre, who had reached the gravel trap, stopped as he returned to the track and the safety car was deployed.

At the front of the field, Barter had claimed the lead of the race from Giusti at turn three moments before the track went yellow. Behind them, some cars continued to battle for position unaware of the safety car situation, which resulted in Yuto Nomura running into the back of Dario Cabanelas as they entered the last sector of the circuit.

The race resumed with under 12 minutes remaining on the clock.

Elliott Vayron overtook Jeronimo Berrio for fourth place and was closing on Souta Arao when a second safety car was deployed due to Antoine Fernande going off the track at turn two. Fernande was eventually able to restart and rejoin the race two laps down after pitting.

The track was green again with two-and-a-half minutes to go. Berrio retook fourth from Vayron as he had a better line going into turn two, as Vayron had tried to pass Arao in the first corner. However, it was Vayron who eventually finished fourth behind Barter, Giusti and Arao, and ahead of Berrio who completed the top five.

In the closing laps, Mateo Villagomez hit Max Reis going into the last corner. Reis continued whereas Villagomez retired into the pit-lane, but no safety car was needed.

The top 10 was completed by Enzo Peugeot, Louis Pelet, Enzo Richer, Romain Andriolo and Leny Reveillere. Andriolo, who had started from fifth on the grid, endured a tough race as he ran with a damaged rear with in the second half of it.