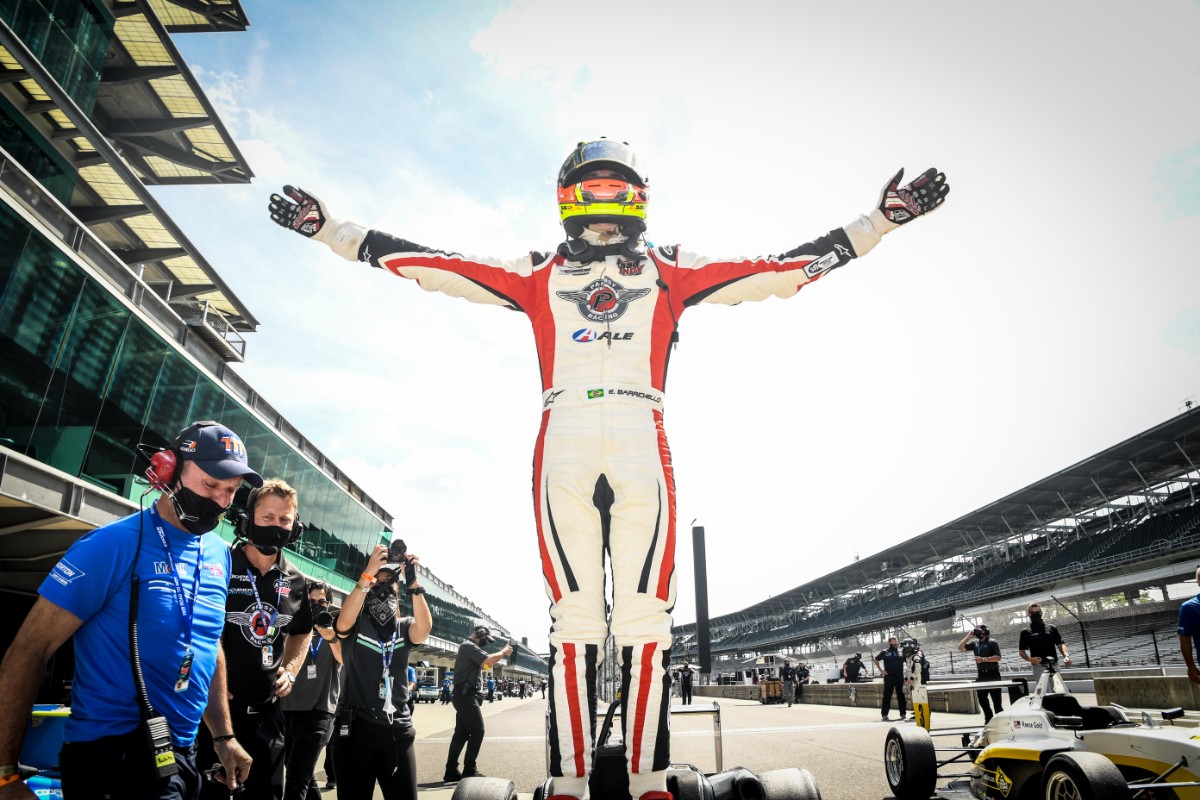 Christian Rasmussen’s winning run in USF2000 came to an end at Indianapolis Motor Speedway, as Eduardo Barrichello picked up his first single-seater wins.

The son of Formula 1 race-winner Rubens was third fastest in qualifying on the road course, behind DEForce Racing’s Kiko Porto and Cape Motorsports’ Reece Gold, and fell to fourth behind Jack William Miller on the opening lap of race one.

Porto pulled away by some margin in the race’s first half, and after Miller retired from damage it allowed Barrichello to join Gold in reeling Porto back in. The top three were approaching corners together in the closing laps, and a failed move for the lead by Gold at Turn 1 allowed Barrichello through.

On the penultimate lap Barrichello passed Porto, who was then shuffled down to third, at Turn 2 for the win.

Jay Howard Driver Development’s Rasmussen, who won the first six races of 2020, fell down the order on lap one but recovered to sixth behind team-mate Nolan Siegel. In fourth was Cape’s Josh Green, who briefly challenged for a podium.

Porto took pole again for race two, but Barrichello beat him off the line, and he then lost further places around the opening lap. Barrichello managed the race from the front after that, with Miller following.

A recovery drive from Porto brought him into podium contention, and he finished in fourth between Christian Brooks (Exclusive Autosport) and Rasmussen.

Rasmussen was rear-ended at the start of race three, while Barrichello led the field after his race two fastest lap put him on pole.

On lap three of 20, Miller and Gold passed Barrichello and the race became a battle between those two. Miller had the job done until he approached Turn 1 on the final lap, when he missed his braking point and slid off the road.

Gold and Brooks passed him to finish first and second, and Miller’s unsafe return to track at Turn 2 got him demoted to fourth behind Porto, whose new team-mate Cameron Shields finished seventh. Barrichello held off Green for fifth.

Rasmussen’s lead has been cut to 50 points by Gold, while a bad round for Michael d’Orlando has dropped him from second to fifth in the points.