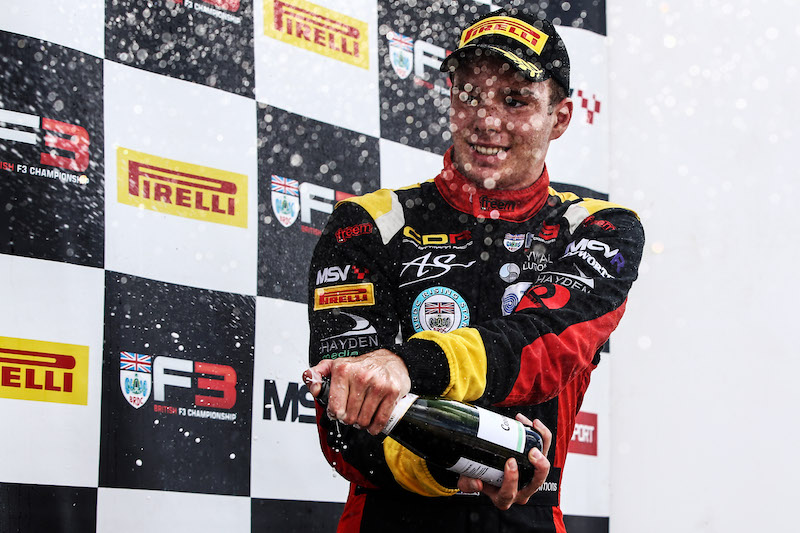 Ayrton Simmons took victory in the first race of his one-off return to the BRDC British Formula 3 Championship, beating Hitech GP’s Kush Maini in the opening race at Brands Hatch.

Euroformula Open regular Simmons started from pole and made a good start to hold the lead at the start of the race. Maini slotted in ahead of Douglas Motorsport’s Ulysse de Paew and fast-starting Double R Racing’s Louis Foster. However, the safety car was brought out on the first lap for Carlin’s Kaylen Frederick.

Championship leader Frederick’s day went from bad to worse early on. He started down the order after beaching the car in qualifying and went off at the exit of Surtees on the opening lap, bringing out the safety car.

He didn’t do significant damage to his car – damaging the nosecone primarily and some slight suspension damage – but the damage to the tyre barriers meant that the safety car was out for more than half of the race.

The scheduled 14-lap race became a timed one and Chris Dittmann Racing’s Simmons got a good restart in the remaining eight minutes to open up a small gap of around a second to Maini in front.

Maini was able to close up to Simmons again late-on, with de Paew in close proximity, but overtaking proved to be incredibly difficult around the Grand Prix layout.

Simmons’ gap at the end was just 0.587 seconds to Maini behind, with de Paew rounding out the podium After his good start, Foster ended up in fourth from eighth on the grid.

After a quick repair, Frederick was able to rejoin but being so many laps behind he wasn’t classified as a finisher and will therefore start last for the second race as well.

Douglas’ Manaf Hijjawi ran wide on the opening lap and Hitech’s Reece Ushijima had errors early on and slipped right down the order but will start towards the front in the reverse-grid race, joined by Bart Horsten who slipped down late-on.