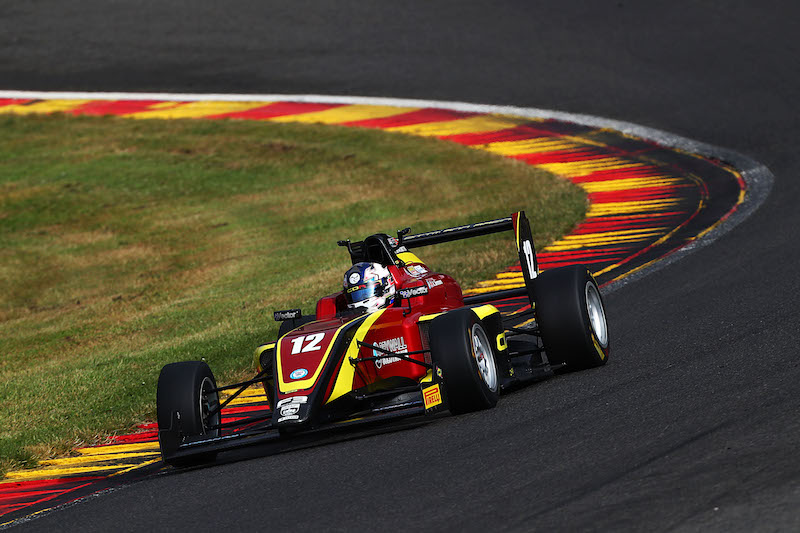 Chris Dittmann Racing driver Simmons made a strong start from pole, leaving Ulysse de Pauw and Neil Verhagen to battle for second. Simmons rapidly extended his gap to the rest of the field, and was almost three seconds clear when Clement Novalak passed Verhagen for second late in the race.

Novalak immediately started to close the leader’s gap, lapping around half a second quicker than the race leader, but ran out of laps before he was close enough to challenge. The end margin between the two was 1.812 seconds, with Kiern Jewiss a similar distance behind.

Douglas Motorsport’s Jewiss was one of the fastes in the closing stages of the race. A line of cement dust ? on track to clear up after an accident in another category ? at the first corner provided a good overtaking opportunity, which Jewiss used to pass Fortec’s Manuel Maldonado for fourth, and then Verhagen at Les Combes on the same lap.

Hampus Ericsson led Double R Racing team-mate Verhagen home in fourth, with Maldonado completing the top five. Jewiss’s team-mate De Pauw was forced to pit early on after damage to his front wing endplate, and finished at the back of the field.

Sasakorn Chaimongkol and Jonathan Hoggard were fighting over seventh on the final lap when Chaimongkol span at the final corner. Hoggard came through to take the position, while Chaimongkol eventually recovered to cross the line 13th.