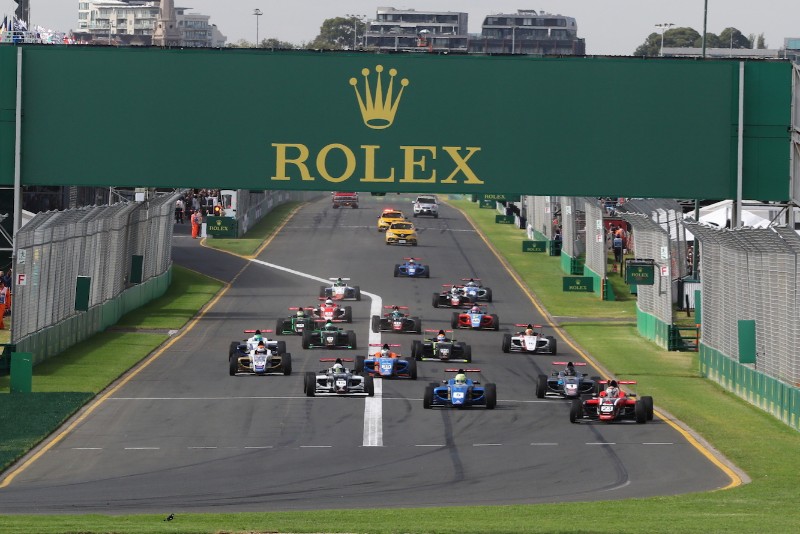 Leeds took a lights-to-flag victory in the opening race of the season, having to hold off Ryan Suhle and Lochie Hughes after a safety car caused by a collision between Heath Collinson and two-time British F4 starter Christian Lester.

Team BRM duo Suhle and Hughes hounded AGI Sport driver Leeds to the flag, with the trio crossing the line covered by a second.

Jackson Burton took a surprise fourth to take the rookie win, making his first F4 start after two underwhelming seasons in Formula Ford. Jayden Ojeda battled up to fifth after a slow start that dropped him from the front row to seventh.

The second race was also interrupted by safety cars, and led to last lap dash to the flag.

Tommy Smith (Team BRM), who finished ninth in the opening race, managed both safety car restarts, but was kept under pressure by AGI Sport?s Antonio Astuti.

Astuti made his move for the lead at the penultimate corner of the race, with Smith being forced onto the grass as Astuti took his first win. In 2018 his best race result was fifth.

Smith dropped back to fourth, behind MTEC Motorsport duo Ryan Yardley and Taylor Cockerton. His BRM team-mate Hughes rounded out the top five.

2018 champion Ojeda brought out the first safety car when he locked up and collided with Suhle on the opening lap. Suhle was able to continue but Ojeda was left stranded on the track, along with Matt Holmes, who retired due to a separate incident.

The green flags had hardly been flashed to signal a return to racing when Josh Smith made contact with a tyre barrier and was sent bouncing through the astroturf at turn one, prompting safety car number two.

Ojeda bounced back from the race two disappointment to win the final race from start to finish, though a damaged wheel threatened to prevent the triumphant end to his Australian F4 career.

Leeds had no answer to Ojeda’s early pace, and despite his leading team-mate’s wheel problem, he could only bring down the gap from three seconds to 0.8s.

Suhle, who was runner-up to Ojeda last year, spent most of the race battling to keep team-mate Hughes behind in a battle for third. The end result was a 0.2s advantage for Suhle. Taylor Cockerton completed the top five.