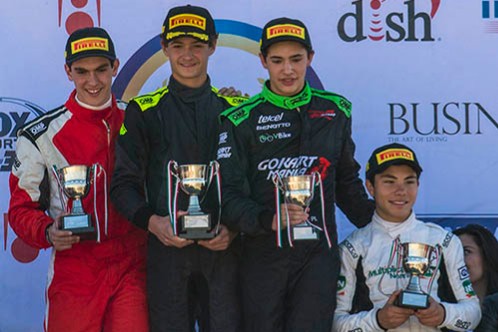 The American, who drives for the Esteban Gutierrez-linked Scuderia Martiga team, won a race apiece at the Autodromo Miguel E. Abed and Parque Tangamanga rounds, and proved more consistent than three-time winner Sulaiman of the rival Ram Racing squad.

Sulaiman was the fastest man across the two rounds, and drove a storming race to win the Miguel E. Abed opener by 4.527 seconds over RPL Racing’s Pablo Perez de Lara. Crawford was just behind in third.

Sulaiman was back on track for the third race, in which he started from pole and extended his championship lead by beating Crawford to victory.

At Parque Tangamanga the title-fighting pair picked up where they’d left off, with Sulaiman just edging Crawford to race one victory. Completing the podium was Crawford’s Canadian team-mate Nicholas Christodolou, who became an increasing threat as the weekend went on.

A four-way fight for victory was topped by Crawford in the second race, as the podium trio was covered by just over half a second. Perez de Lara was the runner-up, and he went one better in the final race as he beat team-mate Emiliano Richards by 0.257s to take his first win.

Christodolou made it a clean sweep of third places, while Crawford finished fourth and moved into the championship lead after Sulaiman retired with car problems. The pair head to the fourth round at Monterrey split by eight points, with Perez de Lara a further four behind.