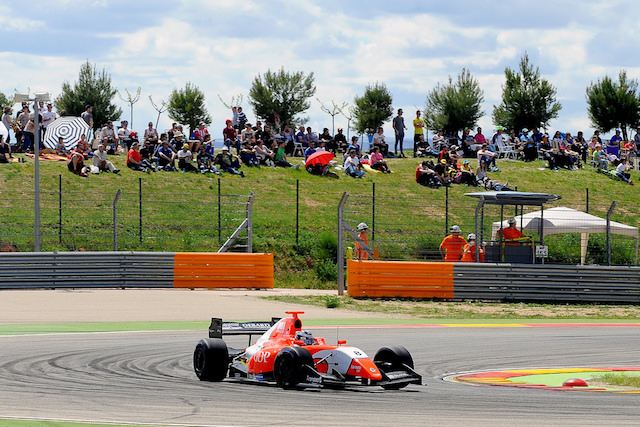 Aurelien Panis?has taken his first win in Formula V8 3.5 in the second race at Motorland Aragon in a lights-to-flag fashion.

The race had an aborted start as Egor Orudzhev stalled on the grid, but once the lights were out, Panis flew past?Tom Dillmann on pole into the first corner and led every lap.

Behind the two Frenchmen was an incident involving?Matthieu Vaxiviere and?Louis Deletraz, where the former?tried to overtake Deletraz into the first corner, only to make contact and put both into a spin.?Vaxiviere retired while?Deletraz was able to get going with relatively little damage on his Fortec?car.

From that point on, the battle for the lead was only really between Panis and Dillmann. Despite Dillmann being the far more experienced driver, he was unable to get past?Panis and eventually lost even more time behind him during the mandatory pit-stops. The two spent the rest of the race nose to tail until the chequered flag.

Behind them came Rene Binder, who took third position after rivals ahead of him crashed out at the start. Yu Kanamaru followed him home in fourth to make up for his non-finish in race 1.

But the real star of the race was Deletraz, who was consistently the fastest driver on track to pass his way from dead last on track to fifth position. Johnny Cecotto led home?Roy Nissany in sixth and seventh positions respectively, with Alfonso Celis holding off?Pietro Fittipaldi across the line for eighth and ninth.

After starting from the pit-lane, Orudzhev made many positions back up the grid, but collided with?Matevos Isaakyan at turn 9, taking Orudzhev out of the race and leaving Isaakyan to take the final points paying position with tenth.