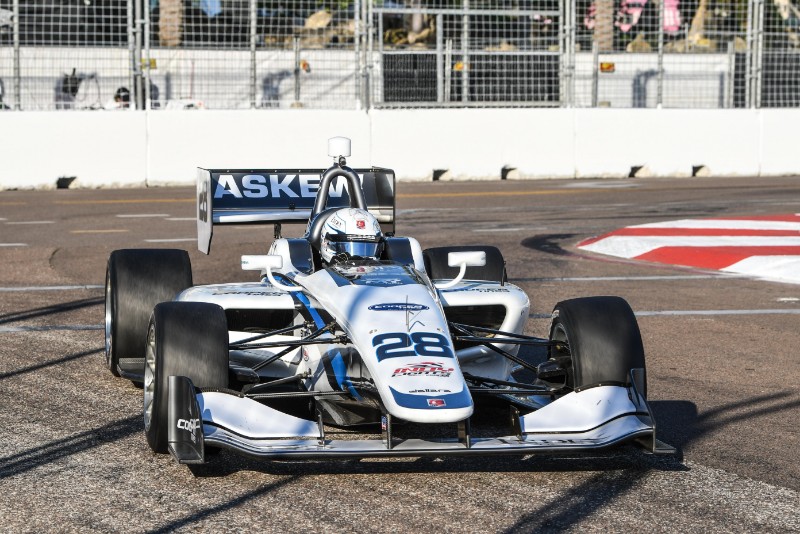 Race one poleman Zachary Claman DeMelo initially set the pace for Belardi Auto Racing, but in the second half of the session it became a scrap between Andretti Autosport’s Askew and Juncos Racing’s Ribus VeeKay.

Local man Askew improved on his best once he had reclaimed first place from VeeKay, putting him just out of reach of VeeKay.

Askew’s Andrreti team-mate Robert?Megennis?had a sniff of second place with little over two minutes of the session remaining, but ended up less than a tenth of a second short.

DeMelo ended up in fourth, just 0.1958s off pole, and considerably ahead of Belardi team-mates Julien Falchero and Lucas Kohl, who were eighth and ninth.

The debuting BN Racing team filled the third row of the grid with Toby Sowery (whose car is being run in partnership with Team Pelfrey) and David Malukas, the latter escaping without damage from an early off at Turn 4.

Ryan Norman was the weakest of the Andretti drivers in seventh, but may not start the first race of the weekend after a hard hit into the walls late in the session that crushed the left-hand side of his car.

VeeKay’s Juncos team-mate Dalton Kellett, the most experienced driver in the field, was the slowest man on track in 10th.