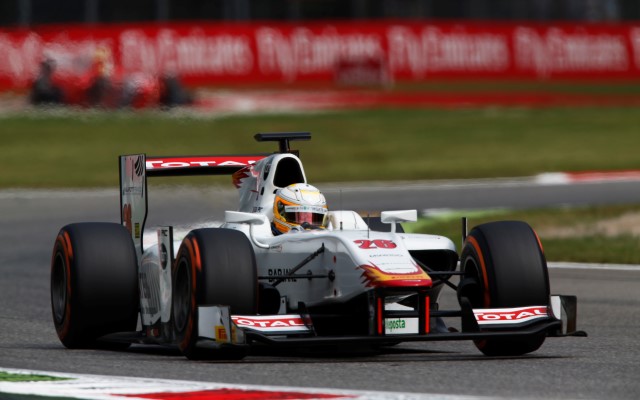 Arthur Pic set the pace in the GP2 free practice session at Monza.

The Campos Racing driver was already at the top of the times when he set an improved lap inside the final minute to secure first place.

Stoffel Vandoorne was second, 0.178 seconds away from his fellow Formula Renault 3.5 convert. Championship leader Jolyon Palmer was third, just ahead of Mitch Evans.

Stefano Coletti was fifth fastest but suffered the ignominy of becoming the first driver to find the now-smaller gravel trap on the outside of the Parabolica, beyond the controversial new asphalt run-off, ending his session with 20 minutes left on the clock.

Simon Trummer took sixth ahead of Felipe Nasr, who arrives in Italy with a 32-point deficit to Palmer. Italian hope Raffaele Marciello got himself up to eighth after spending much of the session down the order, but stopped after the second Lesmo after the chequered flag, meaning that Racing Engineering ended practice with both of their cars stranded out on the circuit.

Stephane Richelmi was ninth while Jon Lancaster enjoyed a competitive showing for Hilmer with tenth.

The top 20 were covered by less than a second, while Pierre Gasly was 22nd in his first drive of a GP2 car with Caterham and Sergio Campana was 25th of the 26 runners on his first appearance with Lazarus.

Daniel Abt was slowest, two seconds off the pace, after breaking off part of his floor when he spun over the kerbs at the first chicane early on.