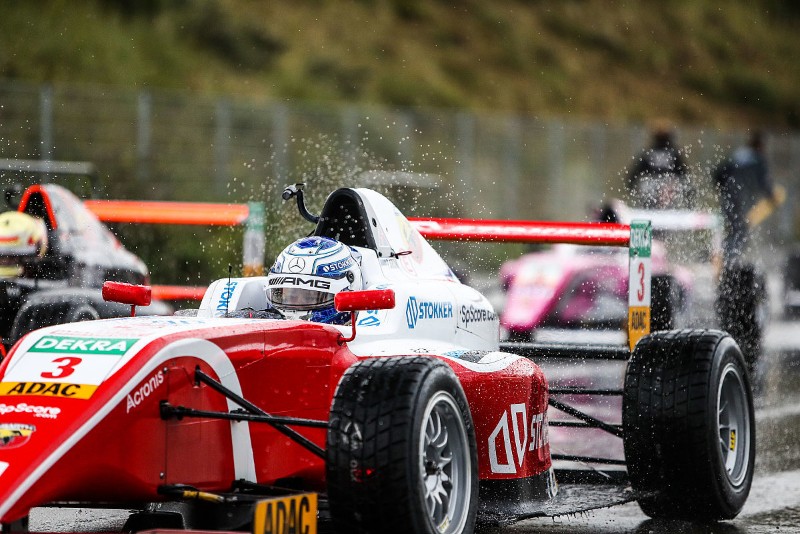 Mercedes Formula 1 junior Paul Aron took his second ADAC Formula 4 win of the season in the second race at Zandvoort.

The Estonian teenager passed polesitting Prema team-mate Gianluca Petecof down the inside of Turn 1 at the start, and controlled the pace from the front for the rest of the race.

An early safety car period to recover the stranded US Racing car of Arthur Leclerc proved no worry for Aron, and it was actually later in the race that Petecof started applying more pressure.

The second placed driver had shut the door on Van Amersfoort Racing’s Dennis Hauger when he’d attempted the same overtake on him after the safety car, causing Hauger to spin down to last place, and the lead pair were split up with just minutes left of the race when Petecof was handed a drive-through penalty.

This promoted sixth-placed starter Oliver Rasmussen to second, having withheld race-long pressure from US Racing pair Theo Pourchaire and Alessandro Ghiretti. The fourth US Racing car of Roman Stanek was also in that battle until he was handed a drive-through penalty for a jumped start, a offence Leclerc also committed.

Mikhael Belov and Gregoire Saucy finished fifth and sixth for R-ace GP, a substantial distance ahead of Mucke Motorsport’s Nico Gohler, who held off a train of cars that included VAR’s Sebastian Estner and Niklas Krutten, team-mate Joshua Duerksen and the penalised Petecof.