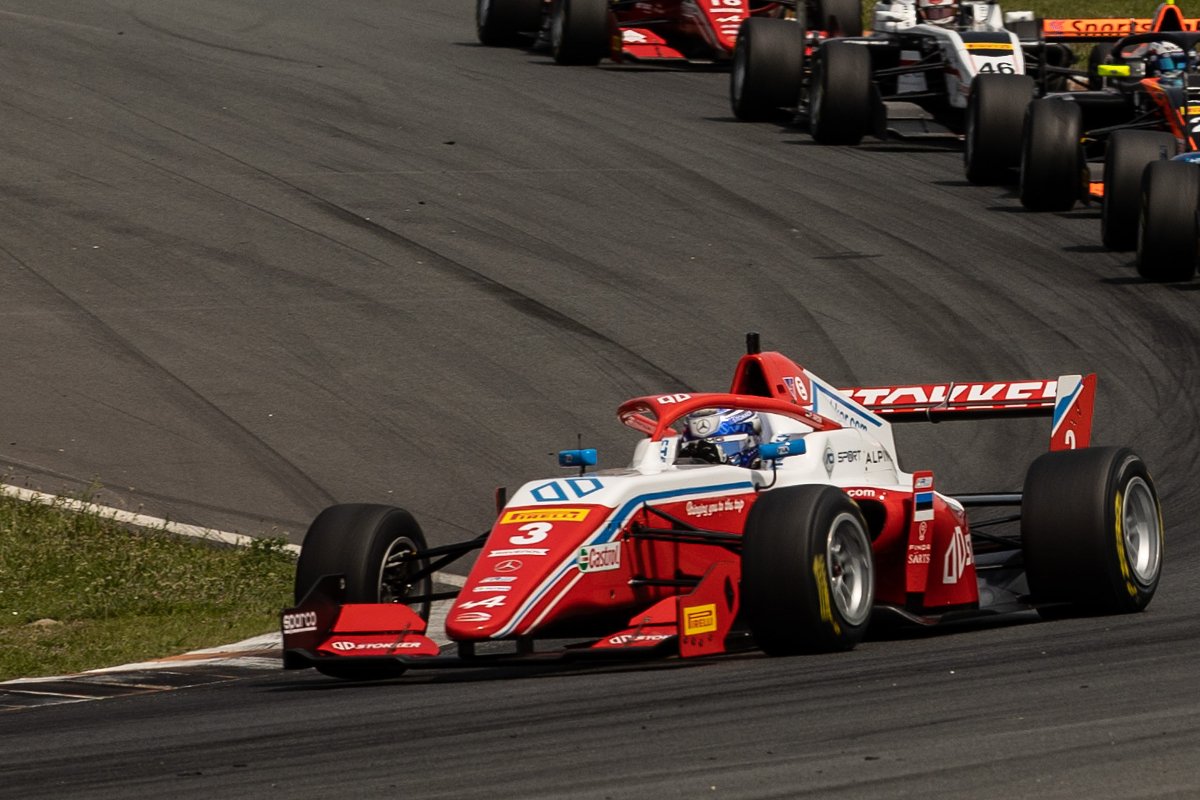 Paul Aron took pole position for the second Formula Regional European Championship by Alpine race of the weekend at Zandvoort with team-mate Dino Beganovic joining him on an all-Prema front row.

Going out first in Group B, Aron’s best time of 1m30.570s remained unbeaten despite Beganovic improving by 0.33 seconds on his final lap in the later session for Group A.

Sebastian Montoya made it a Prema 1-2-3 by setting the second fastest time in Group A, and will be joined on the second row by Van Amersfoort Racing’s Kas Haverkort who was another to improve on his final tour.

After an initial exploration lap all 35 runners returned to the pits under a planned red flag to allow all the teams to fit slick tyres.

Race one victor Aron and his team-mate Montoya headed the field onto the track and were immediately trading fastest times.

Aron moved to the front with a lap of 1m31.219s, before Montoya broke the 1m31s barrier to leap ahead with five minutes left.

In the final two minutes of the session the Mercedes-AMG junior stepped up a level, going fastest with a 1m30.862s, before improving on his penultimate and again on his final lap to finish on 1m30.570s.

A late crash at the banked turn 3 by Pietro Armanni in the final seconds brought out local yellows. The incident indirectly caused Aron a brief scare, as having taken the chequered flag he was confronted by a rescue vehicle on the pit straight, and had to lock up to avoid running into the back of the slow moving truck.

Trident’s rookie Tim Tramnitz again showed impressive pace to set the fourth fastest time and will be looking to make up for a disappointing first race retirement caused by a screw failure on the front suspension.

Beganovic was immediately at the top of the timing screens in the second session, setting a time of 1m31.482s on his fourth lap and was never seriously challenged at the front.

As the pace quickened he was able to lower the best mark on his fifth, seventh and ninth laps before an outstanding final lap saw him drop below 1m31s as the last driver to take the chequered flag.

Trident’s Leonardo Fornaroli had been lying an extremely impressive second before Haverkort’s late improvement pipped his time by just 0.012s, but will nevertheless start from the outside of the third row.

Hadrien David was unable to repeat his strong qualifying performance from Saturday, ending the session fourth in Group A to leave him eighth on the grid as he looks to make amends for losing his podium place in race one due to a push-to-pass infringement.

The unfortunate Joshua Dufek, who had put in such an outstanding performance in qualifying and the race on Saturday, before also incurring a time penalty for the same mistake as David, could only manage seventh-fastest in his group this time, and will start 14th.