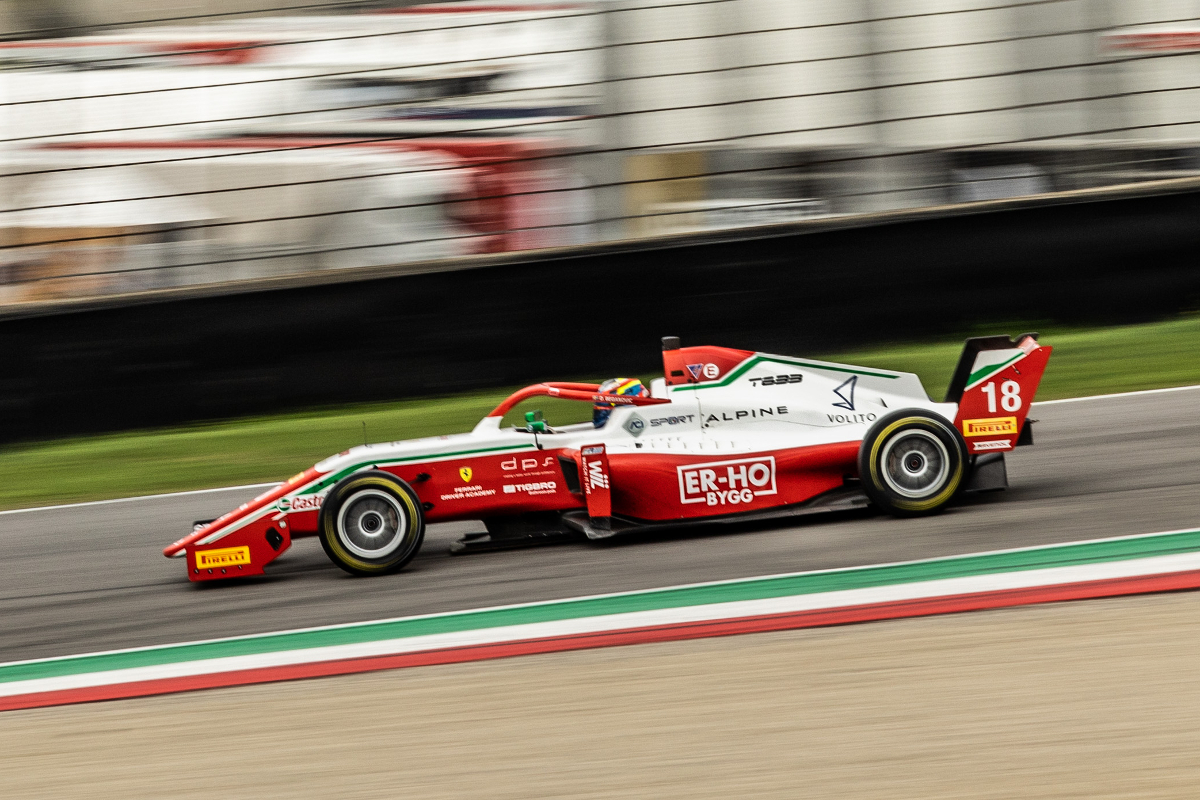 Paul Aron maintained his perfect Mugello record in the Formula Regional European Championship with a dominant lights-to-flag victory, but it was team-mate Dino Beganovic who was crowned champion.

Beganovic held on to finish fourth in the penultimate race of the season, despite a late challenge from Leonardo Fornaroli.

Victor Bernier converted his front row start into a superb second place for FA Racing, the Frenchman having acknowledged to Formula Scout before the race that a podium was his target given Aron’s formidable pace.

Aron made a perfect start and quickly extended his lead over Bernier, who defended forcefully to keep Beganovic behind him on the run down to San Donato on lap one, edging the Swede onto the kerbs on the pit exit.

The Ferrari junior was able to close the gap to Bernier to just over 0.3s but never came close enough to risk a move, particularly with the title at stake.

Further back, Gabriel Bortoleto, Kas Haverkort, Hadrien David and Gabriele Mini were looking to make up positions, with Mini being particularly aggressive as he moved through. The ART Grand Prix driver found his way past David through turns four and five on lap seven.

Once past Haverkort, Mini quickly hauled in Bortoleto, the two battling hard for position. Bortoleto ran wide but Mini was unable to get past before the two finally tangled, sending Bortoleto into the barriers and Mini into the pits and retirement, having lost his front wing.

The resulting safety car cost Aron his 3.9s lead over Bernier. As the safety car came in with three minutes plus a lap remaining, Aron deliberately left his restart to the last second, causing confusion in the pack.

He was immediately away and clear but Dufek took the chance to pass Beganovic for third on the run into San Donato. Dufek was unable to challenge Bernier for the rookie victory, while rookie championship leader Fornaroli tried everything to get ahead of Beganovic to join the fight.

However the Swede, needing fourth to take the title with a race remaining, held off the Trident driver’s challenge to take the flag and the championship, irrespective of the outcome of the appeal into his Paul Ricard exclusion.

Haverkort managed to depose Maceo Capietto from sixth on the final lap, but the Monolite driver held on to take a deserved seventh despite running wide as a result.

David, Arden’s Joshua Duerksen and Laurens van Hoepen, up from 18th on the grid, completed the top 10.