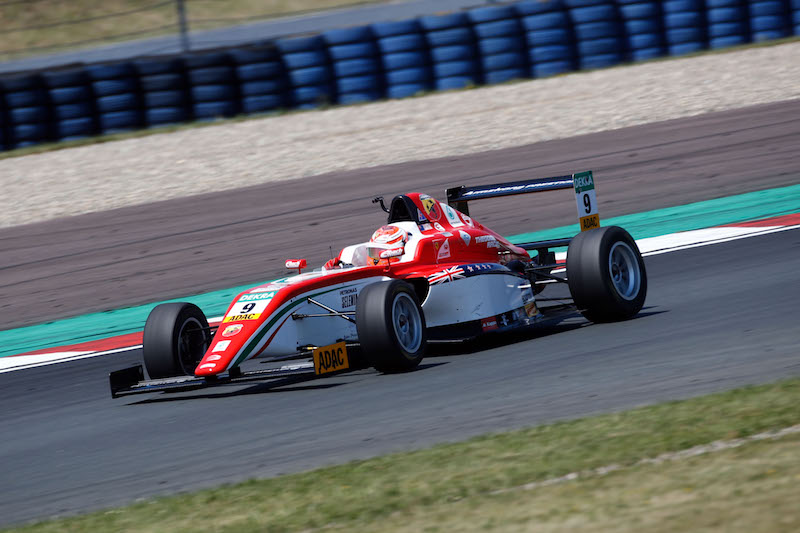 Marcus Armstrong continued his recent winning form with victory in the first race of ADAC Formula 4’s return to Oschersleben.

After Julian Hanses was excluded from second place in qualifying for a technical infringement, Ferrari junior Armstrong was promoted onto the front row alongside first-time pole-sitter Kami Laliberte.

That replicated the front row from the last race at Oschersleben in April, when both drivers went off into the gravel at the first corner after trying to out-break each other.

This time, Laliberte was very slow away from pole, allowing Armstrong to lead Jonathan Aberdein into the first corner, which for this weekend’s TCR meeting takes a smoother shortcut across the inside of the usually very-tight opening turn.

Armstrong and Aberdein ran nose-to-tail for much of the race, with less than half a second separating them for a large distance before Armstrong eventually finished 0.72 seconds clear for his third win from as many events across the German ADAC and Italian rounds.

Aberdein meanwhile took his first podium finish since the opening round at Motopark’s home circuit.

Felipe Drugovich ran close to the front two for a large portion of the race as he took third, cutting the gap to the championship leader Juri Vips.

After starting eighth, and gaining places from the slow-away Laliberte and Nicklas Nielsen, Vips passed David Malukas for fifth on the first lap, but he was surprisingly unable to keep pace with the drivers ahead and instead had to cope with intense pressure from Malukas.

American rookie Malukas eventually got past with only a minute remaining on the outside into the first corner, and finished on the tail of fourth-placed Fabio Scherer.

Juan Manuel Correa was just behind Vips and Malukas at the end of the first lap, but then slid wide through the first corner and finished up 19th.

Kim-Luis Schramm therefore took seventh in front of Sophia Floersch, who had been involved in something of a storm pre-race after posting footage online from an incident in practice when she came very close to hitting a course vehicle that entered the track in her path to attend to another car that had spun off.

Although it has been claimed that Floersch failed to observe red flags, the only sanction she has been given so far is a hefty 20,000 euro fine for posting the onboard footage online without permission.