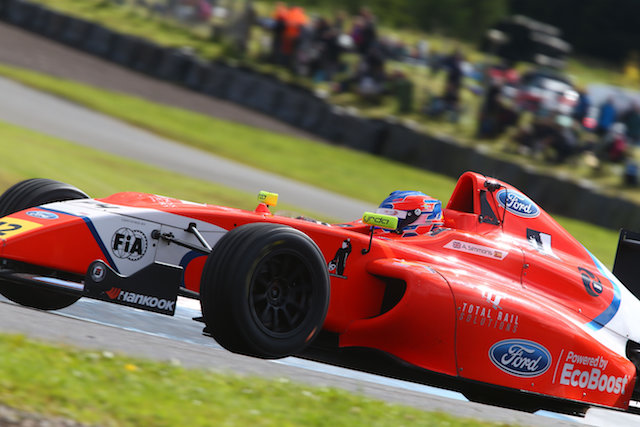 Arden has secured four drivers for the 2017 British Formula 4 championship, led by the returning Ayrton Simmons.

Anglo-Spaniard Simmons had to wait until the third round of 2016 to become old enough to make?his debut, but was a regular?top 10 finisher and ended?the season with second place in the finale at Brands Hatch between champion Max Fewtrell and challenger Sennan Fielding.

He is joined in the team by karting graduates Oscar Piastri and Yves Baltas from Australia and America respectively, while Olli Caldwell will contest his first race at Croft when?he turns 15 on?June 11.

Piastri, 15, finished sixth in the world junior karting championship last year, has already made his single-seater debut in the UAE F4 series and was second to Carlin’s Logan Sargeant in last Friday’s opening test at Oulton Park – two spots ahead of Simmons.

Baltas turns 15 next Wednesday, and the New York native tested with Arden last year as part of its Young Racing Driver Academy.

Caldwell is a long-time YRDA member, and contested half of the Ginetta Junior series last year, with a best finish of fifth on his debut. He will compete for the new Challenge Cup, to be contested by drivers who enter?up to seven of the 10 rounds.

Caldwell will be joined in the Challenge Cup by?Irish driver Lucca Allen, who will be eligible to drive in the second half of the season and is working with Falcon Motorsport.

“It is great working with the YRDA once again, and to have a full four-car line up,” said Arden team manager Ben Bloomfield.

“The championship focuses on the young talent, and within the team we have four of the most talented young drivers on the scene.

“We have been working closely with the drivers over the winter period ? last week at Oulton Park for the first official test we proved we have incredible pace this year.”