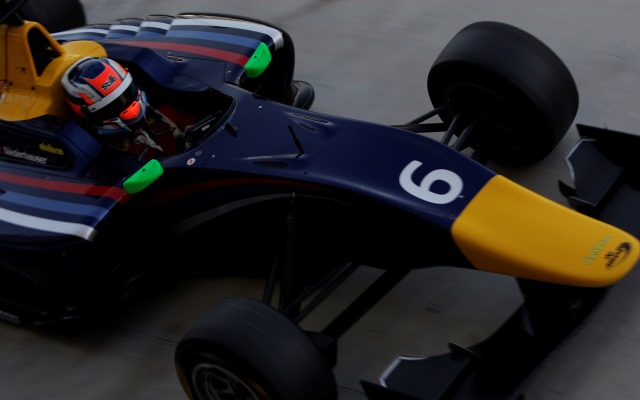 Robert Visoiu and Patric Niederhauser will race for Arden in the 2014 GP3 Series.

Both drivers will be entering their third year in the category, with Visoiu staying with Arden for a second campaign and Niederhauser arriving after two seasons with Jenzer Motorsport.

The pair were previously team-mates at Jenzer in both 2011 – when they were race winners in Formula Abarth – and 2012 in their rookie GP3 seasons.

After finishing 14th in 2012, Visoiu improved to 11th in the standings last year and took two wins from reverse grid pole positions in Valencia and at the Hungaroring.

“I am looking forward to an exciting 2014 season in the GP3,” said the Romanian, who turns 18 next month.

“I feel I’ve learned a lot during the previous year and now I am ready to step up to a more consistent evolution. Arden plays a key role in my development and I am confident that with their help I will be able to reach my goals. It will be the first time I get the chance to race the same car in two consecutive seasons and that makes me feel very positive about 2014.”

Team boss Julian Rouse, whose squad has won back-to-back drivers’ titles with?Mitch Evans and?Daniil Kvyat, believes Visoiu will be able to be a more regular presence at the front in 2014 and is concentrating on improving his qualifying results.

“It?s great to have Robert with us again in 2014, he worked well with everyone in 2013 and we achieved some good results including two races wins,” said Rouse.

“Now having worked together for a season and knowing how to get the best out of Robert we are sure he will be able to push forward and challenge for more regular podiums and wins. He is very strong in the race conditions and if we continue to develop his qualifying pace he will be a very strong competitor in GP3 this season.”

Niederhauser finished seventh with two wins in 2012 but struggled for pace for most of 2013 and ended the year 13th, only scoring podiums in the opening weekend at Barcelona. He joined Arden during the post-season test at Abu Dhabi in November and set the pace on the final afternoon.

“After a great post-season test day in Abu Dhabi I am extremely happy to drive for Arden International in the GP3 Series 2014,” said the 22-year-old Swiss driver.

“It will be my third year in GP3 so my goal is to fight for the Championship. It will be an immense pleasure to work with them and I?m looking forward to a new chapter in my career.”

Rouse added: “Patric is a proven race winner in GP3 and working with him in Abu Dhabi in November highlighted to everyone at Arden that he has what it takes to challenge for the championship in 2014.

“Even though we only worked together for one day during the testing the relationship between Patric and the team was very strong and now we need to focus on developing this further in the pre-season testing.”

Macau’s Chang to do British F3 with Double R