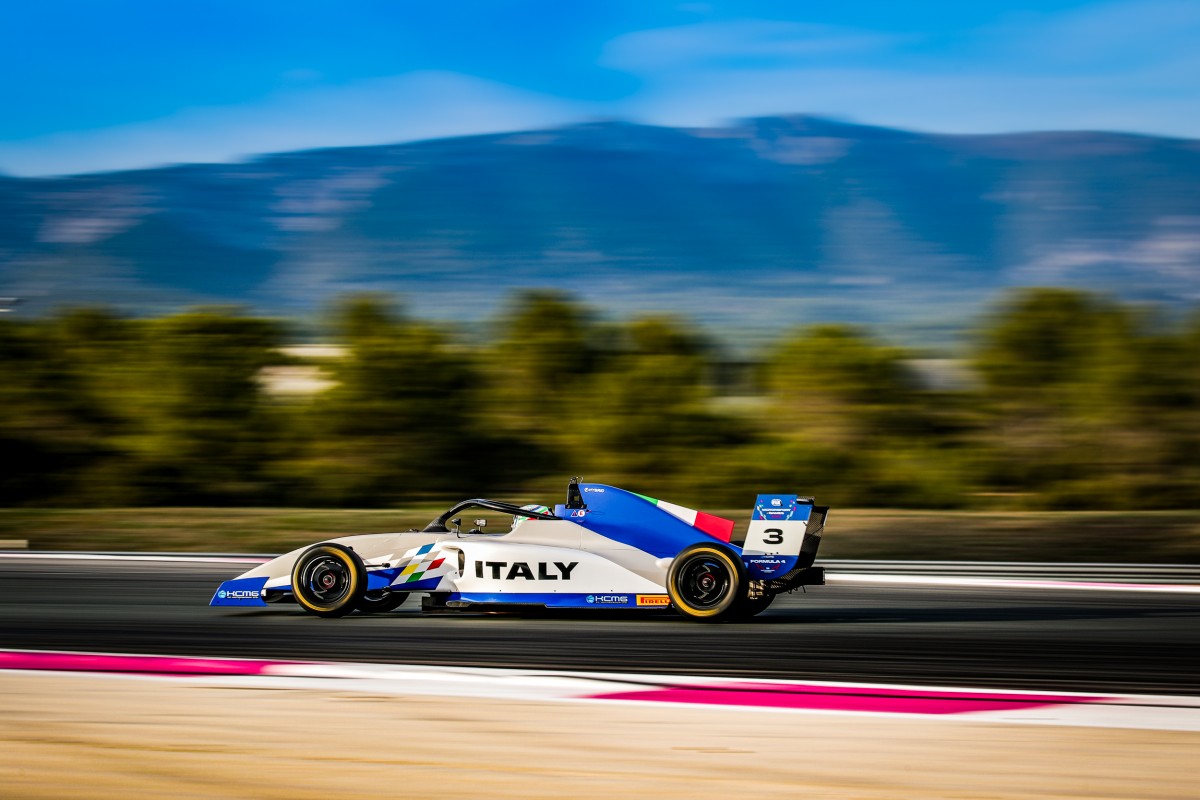 Andrea Rosso won on home soil for Italy back in 2019, and Mercedes-AMG Formula 1 junior Antonelli followed that up with a dominant display in the second edition of the games.

Antonelli was fastest in both practice sessions and qualifying, was unrivalled in the Qualification Race and then secured the gold medal with an assertive win in the Main Race on Sunday morning.

The only point of the race where Antonelli had to look in his mirrors was the start, but fellow front row man Manuel Espirito Santo could not challenge for the lead and the Portuguese spent the race in a lonely second place while Antonelli ran away to win by 6.902 seconds.

Switzerland’s Dario Cabanelas started third but contact on the run to the opening corner broke his rear suspension and sent him spinning around once he hit the brakes. Spain’s Bruno del Pino was investigated over the incident as he rose into third place, with South Korea’s Michael Shin moving past Brazil’s Pedro Clerot for fourth.

The safety car was out before the end of the lap to retrieve Cabanelas’s car, with the biggest mover before the neutralisation being Austria’s Charlie Wurz who had gone from 24th to 11th after gaining several places by going off in the first corners.

Lecertua’s next target was Shin, but he ended up losing out to Dinesen as the field bunched up while he tried to pass the Korean. Shin would end up dropping behind anyway as contact was made and he picked up front wing damage that lost him several places before he eventually had to pit for repairs.

After shaking off Lecertua, Dinesen tracked down Clerot and took fourth from him at Signes halfway through the race, then hunted down del Pino and finished the race eight tenths of a second behind.

Clerot faded in the race’s second half and lost out to Lecertua and Wurz, who escaped investigation for his opening lap jump up the order.

Germany’s Valentin Kluss charged up from 20th to eighth, and Ukraine’s Alex Partyshev was ninth after edging Panama’s Valentino Mini in a late battle.

After struggling earlier in the weekend, France’s Pablo Sarrazin improved his pace during the race and finished 11th although along with Lecertua was shown the black-and-white flag for track limits abuse. Clerot was also investigated for track limits violations.

Verstappen’s explosive arrival in single-seaters – the first time around