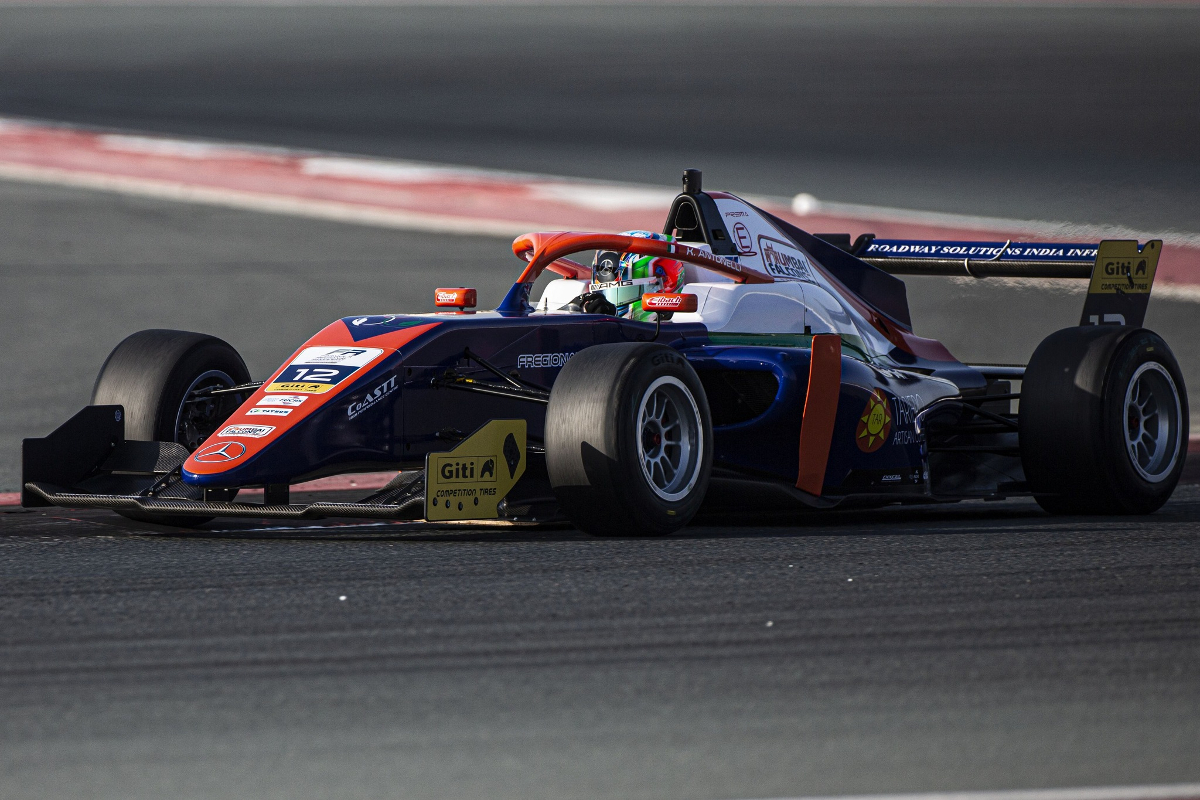 The series has been created out of a rebrand and a calendar tweak for what was FRegional Asia, with the series organisers planning to hold races in East Asia under that name while the races in the United Arab Emirates, and the newly added rounds in Kuwait, now come under the new FRMEC banner.

FRegional Europe champion Dino Beganovic was first to set a representative laptime in Q1, halfway through the session, but his 1m55.393s benchmark only stood for three seconds as Mumbai Falcons team-mate Rafael Camara then crossed the line with a 1m55.350s effort.

R-ace GP’s Matias Zagazeta moved ahead one-and-a-half minutes later, but also did not spend long on top as another Mumbai Falcons driver improved. This time it was Andrea Kimi Antonelli, with a 1m55.092s.

His joy at being fastest was also short-lived, as Hitech GP driver Mini trumped everyone with a 1m54.669s lap that put him on pole by 0.423 seconds.

After he posted that lap, the session was stopped with red flags as PHM Racing’s Taylor Barnard appeared to encounter an issue while on track. The clock was stopped too and the session did eventually restart with over five minutes still to go.

There were only a few improvements following the restart, with the top four remaining the same.

Camara went from sixth to fifth past Sami Meguetounif, and the next improver was Hyderabad Blackbirds powered by MP driver Mari Boya in 13th.

R-ace’s Francesco Braschi, who had been competitive through testing and free practice, could only qualify 16th.

Deleted laptimes due to track limits violations was a problem for several drivers in Q1, and that continued into Q2.

Mumbai Falcons’ Lorenzo Fluxa was first to post a flying lap that counted, with Beganovic swiftly bettering him and Barnard then doing the same.

Barnard’s 1m54.637s lap to go fastest counted, but his next one was deleted and as he was unable to improve he quickly dropped down to third place behind Boya and Pinnacle VAR’s Tasanapol Inthraphuvasak.

Improvements from Antonelli, Camara and Mini then shuffled Barnard down to sixth, with Antonelli going even faster to put himself on provisional pole with a minute to go.

Inthraphuvasak also found more pace, but stayed in third, with Beganovic similarly improving but not moving from seventh place. Q2 ended with Antonelli on pole by 0.208s, ahead of Boya, Inthraphuvasak and Camara.