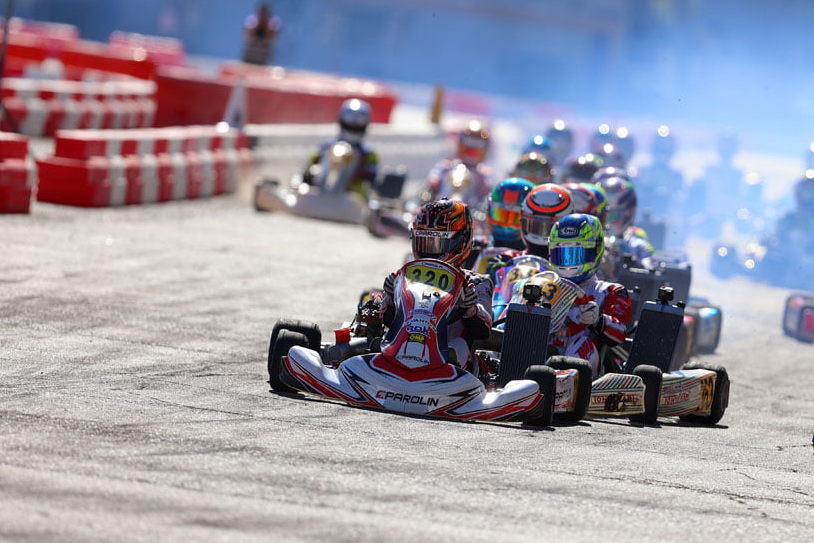 The Road to Indy eSeries held its second round on the Indianapolis Raceway Park oval, and karter Alessandro de Tullio won a race again.

Season four of the iRacing-based Esports championship, which uses an Indy Pro 2000 car, began last week and de Tullio (pictured above at front) won against a grid of Road to Indy hopefuls.

This time he and a few other of the round one stars were invited onto a grid of active Road to Indy drivers for the first two oval races at the track formerly known as Lucas Oil Raceway.

De Tullio streaked away at the rolling start of race one to establish himself at the front of the field, with Mossman holding on to an early second and Papasavvas initially fueding with Mac Clark for third. In the second half of the race Clark hit trouble and had to pit, leaving the podium trio unchallenged while Andretti Autosport’s Matthew Brabham just held off Lastochkin for fourth.

Formula Ford Festival winner Jonathan Browne was sixth by 0.138s ahead of Lucas Oil Formula Car Race Series runner-up Titus Sherlock. Velocity Racing Development’s Noah Ping and Viktor Andersson were the only others to end on the lead lap.

He led Sherlock at first, while the Velocity drivers battled each other behind. There were other close battles between multiple drivers in the midfield, and the second half of the 20-minute race ramped up while Sherlock and Andersson closed in on Green.

With six minutes to go Sherlock spun out in a collision while lapping traffic and fighting for second. This promoted Andersson to second ahead of de Tullio, but they then collided on the penultimate lap.

That eased the pressure on Green, who won, and de Tullio could hold on to second to establish himself as the highest-scoring driver so far. Andersson, despite his clash, just kept himself in third by 0.242s ahead of Papasavvas.

This time Clark and Dean Dybdahl, nominated to take part in the eSeries by the World Karting Association, were the final drivers on the lead lap in fifth and sixth. A 30s penalty issued to Brabham for being responsibile for an incident meant he came 10th, behind Trey Burke (Joe Dooling Autosports), Ping and Dylan Christie (DEForce Racing).