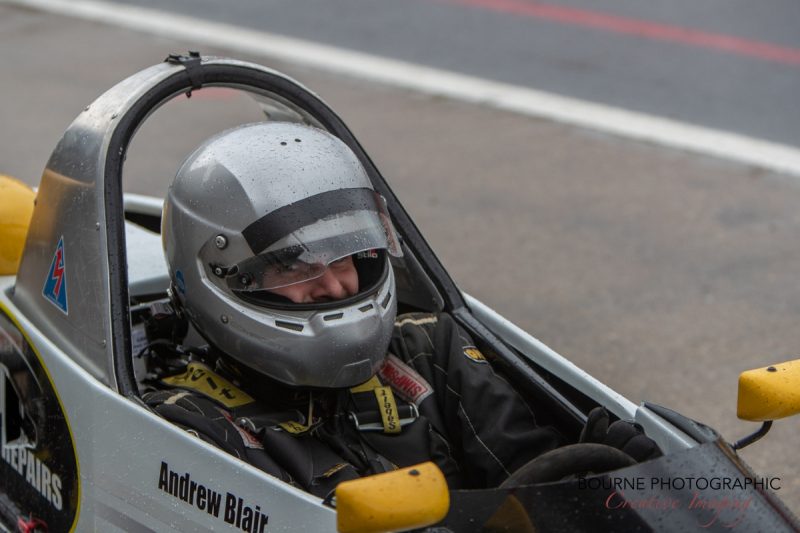 Andrew Blair won the Formula Ford Festival Heat Last Chance race to get into the semi-finals as darkness descended on Brands Hatch.

Pole starter Blair lost the lead to Jason Down at the start as the field went four-wide, but by lap two of 12 he had found his way back into first place. A move around the outside of Paddock Hill Bend as the light and conditions deteriorated regained him the position.

From there, Blair was able to pull away and secure a comfortable lead, crossing the finish line 8.598 seconds ahead of the chasing pack.

Down battled with Stephen Mawhinney for much of the race, but the pair came to grief at Clearways on the penultimate lap.

They both had separate incidents simultaneously, not surprising given the lack of visibility, and this allowed Mark Armstrong – run by Michael Moyers’ dad – to steal second place from the pair after watching for several laps from behind.

Mawhinney rounded out the podium ahead of Down. Behind them was Team Canada scholar Jonathan Woolridge, who fought from the ninth row up to fifth despite his inexperience.

The remaining finishers in the top 12 will all progress into tomorrow’s semi-finals: Oliver Chapman, Stuart Kestenbaum, Tom Cloet, Henry Campbell, Laurie Hughes, Andrew Pryke (who charged from the penultimate row), and Joe Walton.

Simon Pruce and Jordan Harrison failed to start the race.