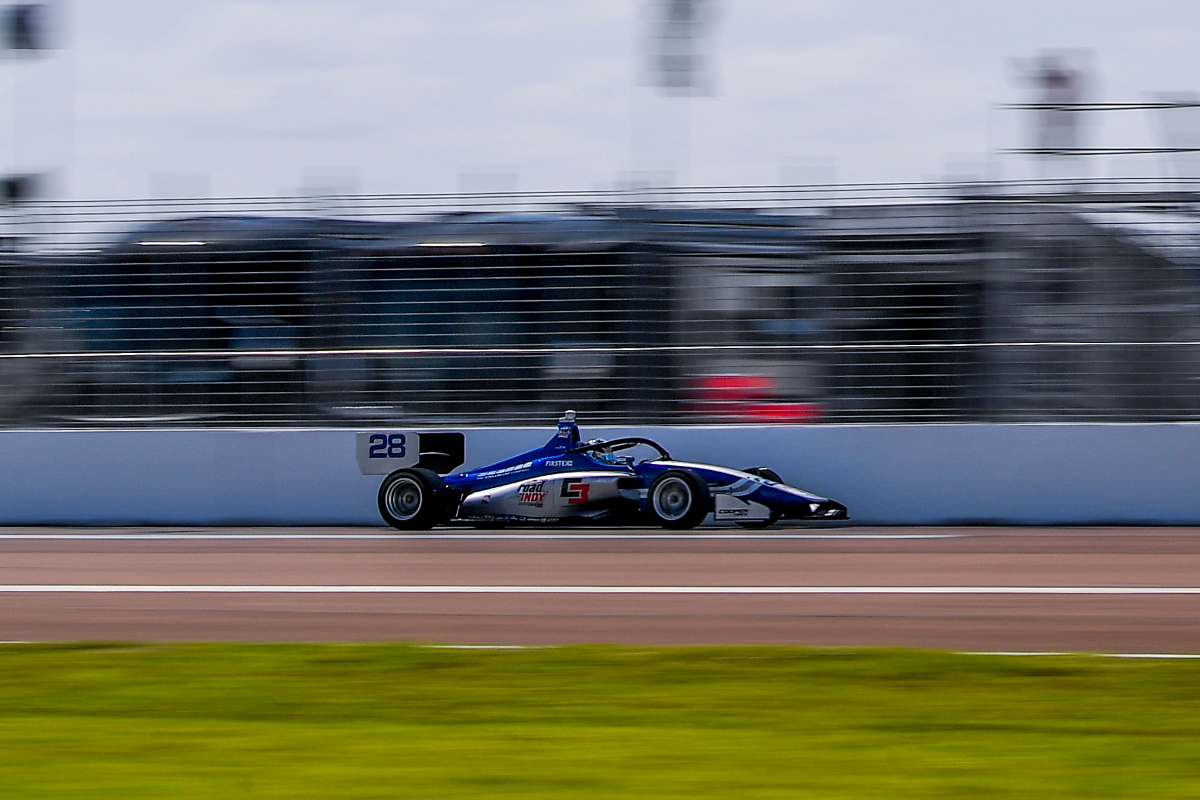 The Andretti Autosport driver nailed the rolling start to be out of threat of attack going into the first corner of the race, where Andretti Steinbrenner Autosport’s Devlin DeFrancesco made a brilliant move on HMD Motorsports’ David Malukas to claim second place.

Kirkwood was quick to extend his lead over DeFrancesco, who came under pressure from Malukas but the American-Lithuanian actually lost spots to Andretti’s Danial Frost and Robert Megennis when he tried reclaiming second.

Global Racing Group with HMD’s Linus Lundqvist also got very close to passing Malukas, but also ended up compromising himself with an overtake attempt and lost a position to Carlin with Jay Howard Driver Development’s Alex Peroni.

Gaps starts to open up before Frost tried passing DeFrancesco into the first corner and created a train of drivers behind him as he had to back off. Megennis and Malukas made contact in this train as Malukas moved back up one place, and the same happened with Lundqvist and Peroni as the points leader tried passing the Carlin driver into turn 1 and instead bounced over him.

Amazingly both drivers continued without any damage, although Lundqvist went to pitlane for precautionary visual checks from his team, and he then got a free actual pitstop while at the back of the field when DeFrancesco crashed out of second place.

The resultant pace car period brought the field back together, and once again Kirkwood nailed the rolling restart.

He pulled away in the final few laps to take victory ahead of Frost, with Malukas completing the podium.

Megennis finished fourth after chopping off a move down the inside by Global Racing Group with HMD’s Benjamin Pedersen into turn 1 that resulted in the Dane’s front wing hitting Megennis’s rear-right tyre and then spinning several times and falling to the back of the field.

As a result of that Peroni finished fifth, and Juncos Racing’s Sting Ray Robb took sixth place after battling past Pserra Racing’s Antonio Serravalle in the second half of the race.

The second Juncos car of Toby Sowery peeled into the pits before the rolling start after losing power, and the Briton only got going again several laps into the race before having to return to pitlane once again.