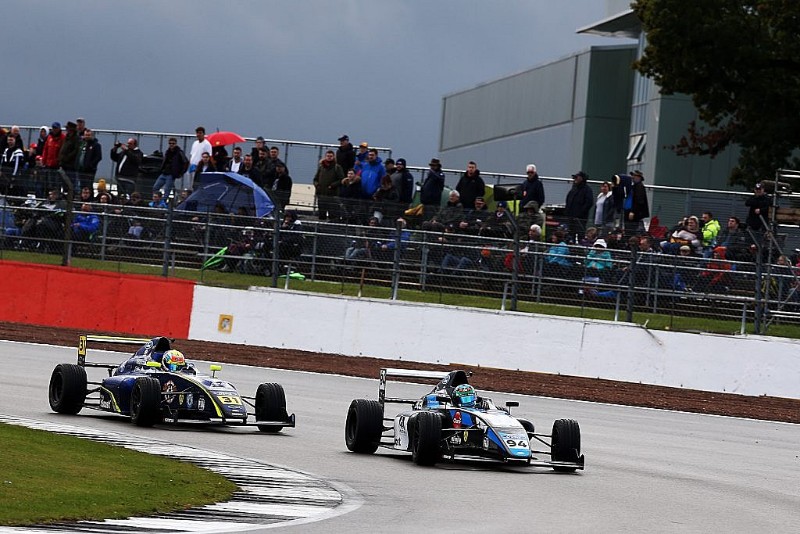 Sebastian Alvarez drew level on points with British Formula 4 leader Zane Maloney with his fourth win of the season at a wet Silverstone.

Double R Racing’s Alvarez was quick to rise up the order from the third row of the grid once ahead of polesitter Alex Connor for the lead looked unstoppable int he lead.

Maloney was also quick to make progress though and once the Carlin driver had passed Arden’s Connor he reeled in Alvarez.

He got the gap between the pair down to half a second, before Alvarez responded and sealed victory by 1.243 seconds.

Alvarez’s team-mate Louis Foster was the fastest driver of the race, but had even more people to pass from the reversed grid, and finished a provisional third.

Early in the race he was facing the wrong way after a clash with JHR Developments’ Carter Williams, but was far faster than those around him and charged into the podium positions. With a few more laps, he would have been level with the top two.

Roberto Faria took Fortec Motorsports’ best result of the season in fourth after Connor span out of the race while battling with Foster, with Bart Horsten being the top Arden driver in fifth.

In his second race in cars, Fortec’s Christopher Lulham finished seventh, ahead of Arden driver Tommy Foster and the JHR trio of Josh Skelton, Carter Williams and Alex Walker.

Reema Juffali (Double R) was fighting for the points until a late-race mistake sent her down to last place.