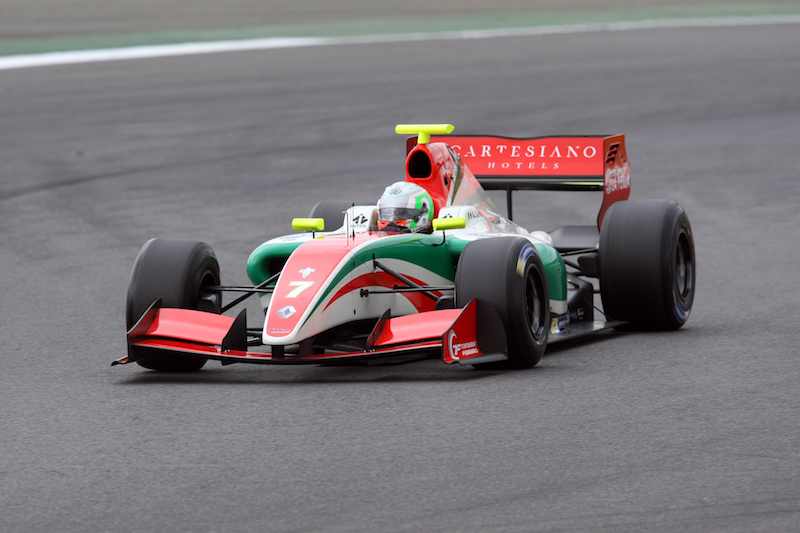 Having beaten?Silverstone dominator?Pietro Fittipaldi to pole position, Celis made a good start to the race, as the Brazilian Lotus driver alongside him bogged down and dropped the back.

Fortec’s Celis was?allowed to escape in the early laps?as second-placed Rene Binder tried to hold Roy Nissany behind him.

Running a visibly higher downforce setup than Binder, Nissany struggled to pass the Austrian even with the tow down the Kemmel Straight, but was?able to beat him on the brakes to get by into the Les Combes.

The gap between Celis and Nissany stood at almost five seconds for much of the race, before Nissany slashed this to under two on the penultimate lap, but the Mexican was able to hold on despite a lock-up causing a flat spot.

“I had a huge flat spot,” he said afterwards.

“I could barely see, and in the last laps I was struggling to keep the pace and maintain the lead.”

Egor Orudzhev came from 10th on the grid – after suffering with traffic in qualifying – to finish on the podium, with a rise completed inside the first 10 minutes of the 40-minute encounter.

The SMP-backed Russian was up to fifth by Les Combes for the first time, and passed Diego Menchaca through the complex, before a fine move around the outside of Fagnes to take third from Binder.

Once clear he was unable to keep up with the lead pair however, finishing 24 seconds behind Celis.

Binder lost fourth?to Celis’s team-mate and compatriot Diego Menchaca when he ran deep at Les Combes with 10 minutes on the clock, and was also passed before the end by Yu Kanamaru, who came from 11th on the grid to finish fifth.

Damiano Fioravanti – driving a third RP Motorsport-entered car after appearing with Giuseppe Cipriani’s Il Barone Rampante concern at Silverstone – was close behind in seventh and unchallenged by the recovering Fittipaldi, who spent a large part of the race stuck behind?Konstantin Tereschenko.

Nelson Mason?briefly got ahead of Menchaca into Les Combes but ran off track and rejoined slowly, before following Fittipaldi past his own?Teo Martin team-mate Tereschenko for ninth.

Matevos Isaakyan was a first-lap retirement, slowing to a halt after a bumpy ride?down the grass along the Kemmel Straight.