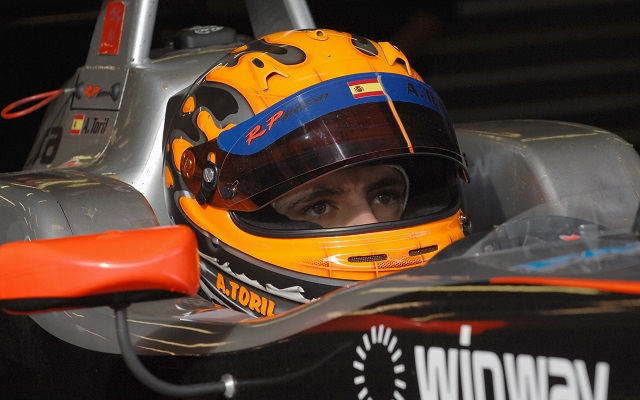 F3 Open graduate Alex Toril will be making the switch to FIA F3 European Championship in 2014, having confirmed a deal with British squad T-Sport.

The Spaniard joins the previously-announced Spike Goddard in what is expected to be a three-car lineup, with Alexander Sims featuring as a prime candidate for the remaining seat.

Toril, 17, made his single-seater debut in 2011 in French F4, before joining the Copa class in the European F3 Open series. After taking seventh in the class standings, he secured a promotion to the main championship and was fifth at the end of the campaign, finishing all but one race in the points.

During the post-season, he did several private testing days with T-Sport and reportedly impressed the British team. Apart from the main series schedule, Toril is also expected to tackle the Macau Grand Prix at the end of 2014.

“I am very happy to be able to race at the FIA F3 with a very professional team as Threebond by T-Sport is and also to have the unique experience of racing in the Macau GP”, said the Spaniard. “I am highly motivated to start the start the season and I am sure that, with T-Sport, we will do a great job. I hope this year I can demonstrate all the experience I have been accumulating during the last two seasons? and compare myself with the other races in what is one of the most competitive European grids.”

T-Sport took fifth in the teams’ standings of the 2013 European F3 season, scoring five podiums – all of which came courtesy of veteran part-time driver Sims.

“We?re delighted that Alex has joined T-Sport for the European F3 season,” said T-Sport team principal Russell Eacott. ?Judging by his results in F3 Open, he is a very talented driver and we look forward to working with him. The European championship is very competitive but we think Alex has what it takes to do a great job.”