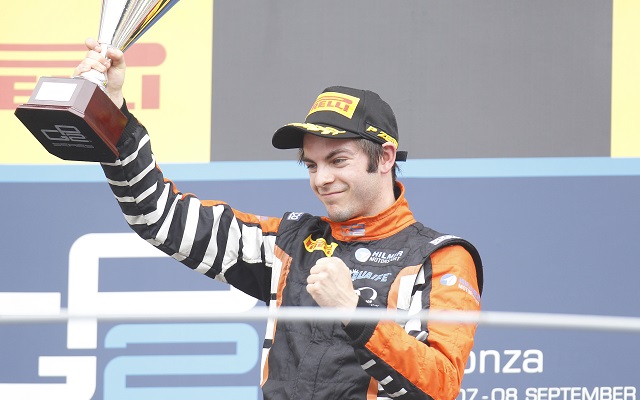 2012 Auto GP champion and GP2 race-winner Adrian Quaife-Hobbs has called time on his single-seater career and secured a plumb GT seat for the coming season.

The 24-year-old Briton will race a McLaren 650 GT3 in the Blancpain Endurance Series for the VonRyanRacing team. He will be one of six drivers in the team across their two cars, alongside McLaren’s five factory GT drivers Alvaro Parente, Bruno Senna, Kevin Estre, Rob Bell and Shane van Gisbergen.

?I?m extremely excited to be embarking on a new adventure in sportscar racing with VonRyanRacing and the McLaren 650S, which I believe will be a front-runner from the first race,? said Quaife-Hobbs.

“We enjoyed a very successful test programme at Silverstone and Snetterton, which continues with two days at Paul Ricard this week, and I?m really looking forward to getting into the car for the first round.?

Dave Ryan, team manager and formerly of the McLaren F1 team said: ?Adrian is a very exciting talent, who has shown himself to be one of the most promising young stars in some of the most competitive single-seater championships.

?With these six drivers we have put ourselves in a very strong position for the season, and we are confident of 2015 being another exciting year.?

Quaife-Hobbs’ car racing career began by winning the T Cars series as a 14-year-old. He moved into single-seaters in 2007 in Formula BMW UK, and a year later he finished fourth in Italian Formula Renault 2.0 – a result he repeated in both the NEC and the Eurocup series in 2009 (behind Motopark team-mates Antonio Felix da Costa, Kevin Magnussen and Marco Sorensen in the former and ahead of the two Danes in the latter).

He began 2010 in the F3 Euro Series but then switched to the new GP3 Series with Manor, and finished fifth in the standings in the following season, getting him a prize test with the affiliated F1 team. In 2012 he dominated the Auto GP series for Super Nova before contesting nearly two seasons of GP2, scoring a total of four podiums including a sole reverse grid victory in 2013 at Monza where his GT career will begin in the BES opener next month.