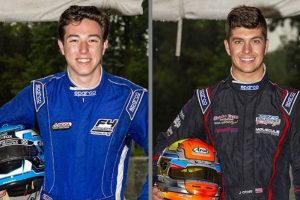 Colin Mullan and Jake Craig have been selected as the 2018 Team USA Scholarship winners after a shootout at Mid-Ohio, granting them entry to the Mazda Road to Indy Shootout.

United States Formula 4 driver Braden Eves was initially selected as a winner, but is currently undergoing recovery from surgery, making him unavailable to compete. The 19-year-old also finished sixth on his USF2000 debut at Portland, and won two out of the three races he entered in the F1600 Championship Series, the United States? national FF1600 series.

Mullan, 16, started racing aged 5 in quarter midgets, and switched to single-seaters last year in Formula Car Challenge. He has concentrated on sportscar racing this year, like current Indy Lights champion Patricio O?Ward did in 2017, and also won twice on his US FF1600 debut.

?Getting on track in some of the world?s most competitive open-wheel racing series will be an experience I?ll never forget,? said Mullan.

?Races like the FFord Festival and Walter Hayes Trophy teach so much about racecraft and getting the most out of the car every session. Plus, with changing conditions and unpredictable UK weather, I?ll have to adapt my driving whenever we get on track.

?I?ve met so many amazing people through the scholarship process, just in the interviews at Mid-Ohio and the shootout alone. Also, having the opportunity to compete in the MRTI Shootout opens up so many new pathways that I never thought were possible for me.?

Craig, 20, karted successfully and has previously taken part in a Ferrari Driver Academy test. Last year eKartingNews selected him for the MRTI Shootout, and he made it to the final five. He?s raced in FF1600 this year, finishing second in the Ontarian FF1600, and winning twice in the sister F1600 Super Series championship in Canada.

?Getting selected for Team USA is a dream come true for me,? said Craig. ?It?s basically the next step to further my racing career and it will be a great addition to my resume. Getting to race in England is going to be extremely beneficial. I?ll be able to continue to improve my race craft and technical understanding of a car. I?m getting about as much track time in a month as I?ve had all year!?

The Team USA Scholarship was launched in 1990 by Briton Jeremy Shaw; its first recipient was 1996 CART champion Jimmy Vasser. Bryan Herta, father of 2018 Indy Lights runner-up Colton, was next, and the scheme has since launched the careers of 2017 IndyCar champion Josef Newgarden, and contemporaries Charlie Kimball, Conor Daly and Spencer Pigot. Oliver Askew won the scholarship and MRTI Shootout in 2016. Last year he was USF2000 champion, and looks likely to graduate to Indy Lights.