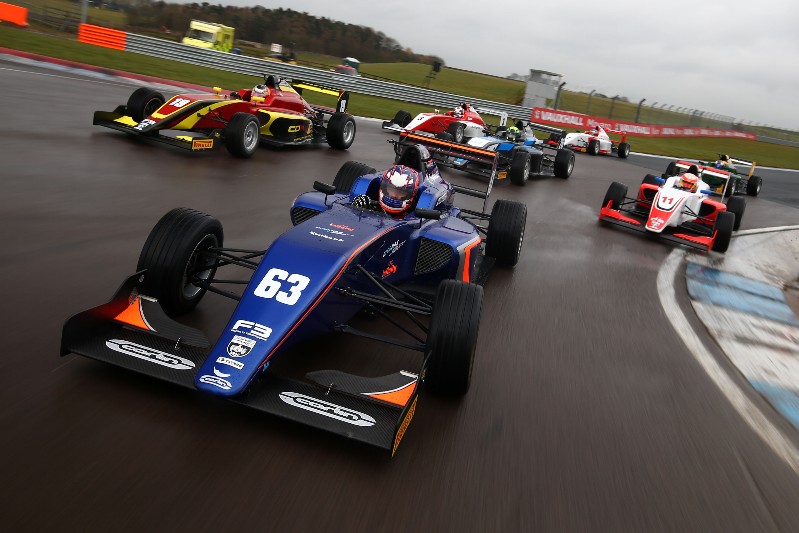 The champion from each of the previous five years of BRDC British Formula 3 and its Formula 4-branded predecessor have gone on to race internationally, and with considerable success.

The 2018 grid doesn’t appear to have the depth of talent that previous years had, although time will tell if this really is the case.

There are 18 confirmed entries, down on previous seasons, and a radical rules change rewarding points for overtakes that has attracted controversy.

On the plus side, a strong eight-round calendar, an exciting majority female line-up at Douglas Motorsport, the signing of double amputee Billy Monger in a fourth car at Carlin, and an inclusion in the Sunoco Whelen Challenge, which offers one driver a seat in the 2019 Daytona 24 Hours.

There are rumours that this will be the final ever British F3 season, as the FIA continues its sweeping reform of junior single-seaters with its eye on creating regional F3 series, but championship bosses will be hoping to prove its relevance as a stepping stone once more. 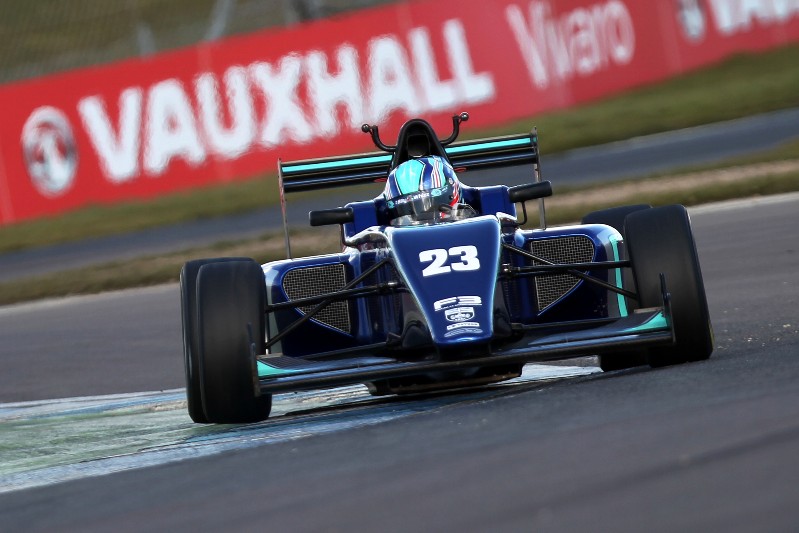 Once again Carlin starts the season as the centre of attention but it’s for slightly different reasons this time, as?Billy Monger makes his heroic racing return.

Although Monger is only confirmed so far for the first round, were he to continue, he could conceivably become Carlin’s best shot at winning the title.

This is because?Clement Novalak, the would-be team leader, will be missing two rounds due to clashing Formula Renault Eurocup commitments, while the combination of?Nicolai?Kjaergaard and?Sun Yue Yang?doesn’t bring title-winning pedigree.

Novalak only made his single-seater debut in the Toyota Racing Series in January, but left New Zealand with two wins and the reputation of a driver set for big things.

Lando Norris had a similar predicament to Novalak in 2016, when his Eurocup title challenge meant he only contested half of the British F3 season with Carlin. In his four rounds he won four times, and finished eighth in the standings. That year was packed with talent, and a weaker field in 2018 should mean that matching, if not bettering Norris’s achievements should be the goal for Novalak.

Kjaergaard finished 10th in the standings last year with Fortec Motorsports, peaking with a fifth place in the opening round at Oulton Park, and finished 13th the year before in (FIA) British F4 with the same team.

The Dane has the support of the Infinity management stable behind him and now has top machinery underneath him (not that the Fortec package was weak), and could use it to spring a surprise having looked competitive in testing.

Sun has had similarly uninspiring results to-date, but the Renault F1-backed Chinese driver has had one less year in single-seaters, and has spent it in Formula Renault rather than an entry-level formula.

Results don’t necessarily mean the world though for Sun, who is using British F3 as a preparation tool for a planned move to FIA International F3, the successor to European F3 being introduced next year.

The 17-year-old is being fast-tracked up the single-seater ladder, and although his time testing the British F3 car and circuits has already proved to be quite challenging, he is more than up for it.

Monger is the key to the Carlin puzzle though, for he is the only driver who has shown title-winning potential in the past.

There are question marks, rather like in Robert Kubica’s case, over whether the outright pace is still there, but if he can’t be competitive with his combination of steering wheel paddles and hip-pivoting control of the pedals, there would be little sense in the 18-year-old being on the grid at all.

The championship’s media day group test suggests he can, having gone sixth fastest, and he quickly adapted to changes in conditions. 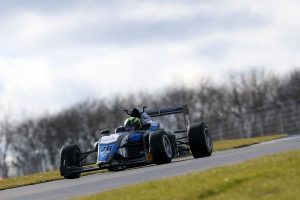 According to many people, as soon as?Linus Lundqivst signed with Double R Racing, the destination of the 2018 British F3 title was decided.

Things don’t look quite so clear cut now, but there is deserved hype around the 18-year-old Swede.

He was third on the championship media day, and was a top ten finisher on his championship debut at Spa-Francorchamps last year. The result may not immediately stand out, but for a driver on his first time in a higher downforce machine at a high-speed challenging track he’d never visited, it certainly turned heads.

Lundqvist drove for Double R last year not only for his F3 cameo, but in his British F4 campaign. He finished fifth in the standings, and would have finished higher had he not been so mistake prone, even though he?often overcame such errors with brilliant charges through the field.

When Lundqvist gets it all together he can be unbeatable, and if he has weekends like that enough times throughout the season he may be able to get away with making a few mistakes and still winning the title.

American?Dev Gore was initially revealed as one of Lundqvist’s team-mates, but has since been replaced by?Krishnaraaj Mahadik?and Pavan Ravishankar.

Mahadik was nowhere in his first season in British F3 in 2016, but returned for two rounds last year with Double R and became a race-winner. Repeating that result will be the Indian’s aim, and if he visits the podium enough times he’ll be odds on for a top five finish in the standings.

In comparison, Ravishankar may be happy with a podium or two come the end of the season. The Singaporean is a winner in Asian Formula Renault, but has struggled in higher downforce machinery both in Britain, where he made a cameo F3 debut last year, and in India, where he has competed in the MRF Challenge. 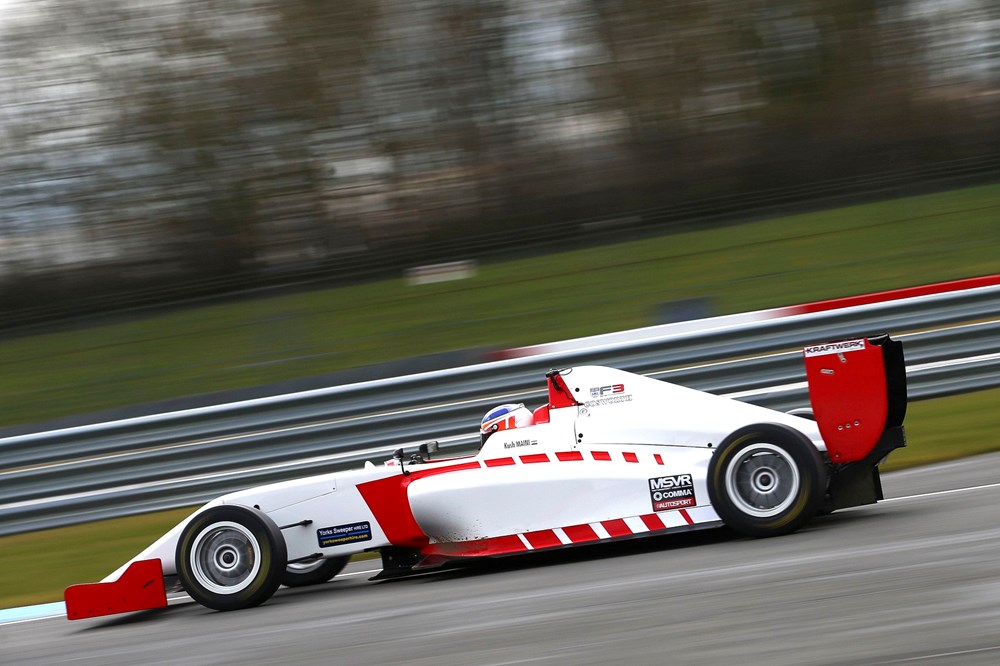 Bedfordshire-based Lanan Racing has taken a driver to the title twice, and has been a race-winner every year since the inception of BRDC British F3/F4 in 2013.

This year’s line-up might repeat the successes of old, but if it’s to do that then it’s drivers need to get up to speed quick.

Kush Maini, younger brother of Haas F1 junior Arjun, has stood on the podium on three occasions in his two seasons in Italian F4, which is a very competitive category.

The elder of the Maini brothers raced in BRDC F4 back in 2014, finishing second to George Russell, and should be able to dispense his knowledge to Kush on what the British tracks and weather are like.

It seems to be working, with the 17-year-old topping the media day by six tenths in damp weather. He’s by no means a title favourite, but neither was elder brother Arjun when he rocked up four years ago.

Maini will be the leader of the team, with his team-mate?Joshua Mason making the step-up straight from karts, and keeping his ambitions in check.

The team’s championship-winning pedigree, should help the pair get up to speed, but the lack of an experienced driver in the team could cost it dear if it wants to recapture past successes. 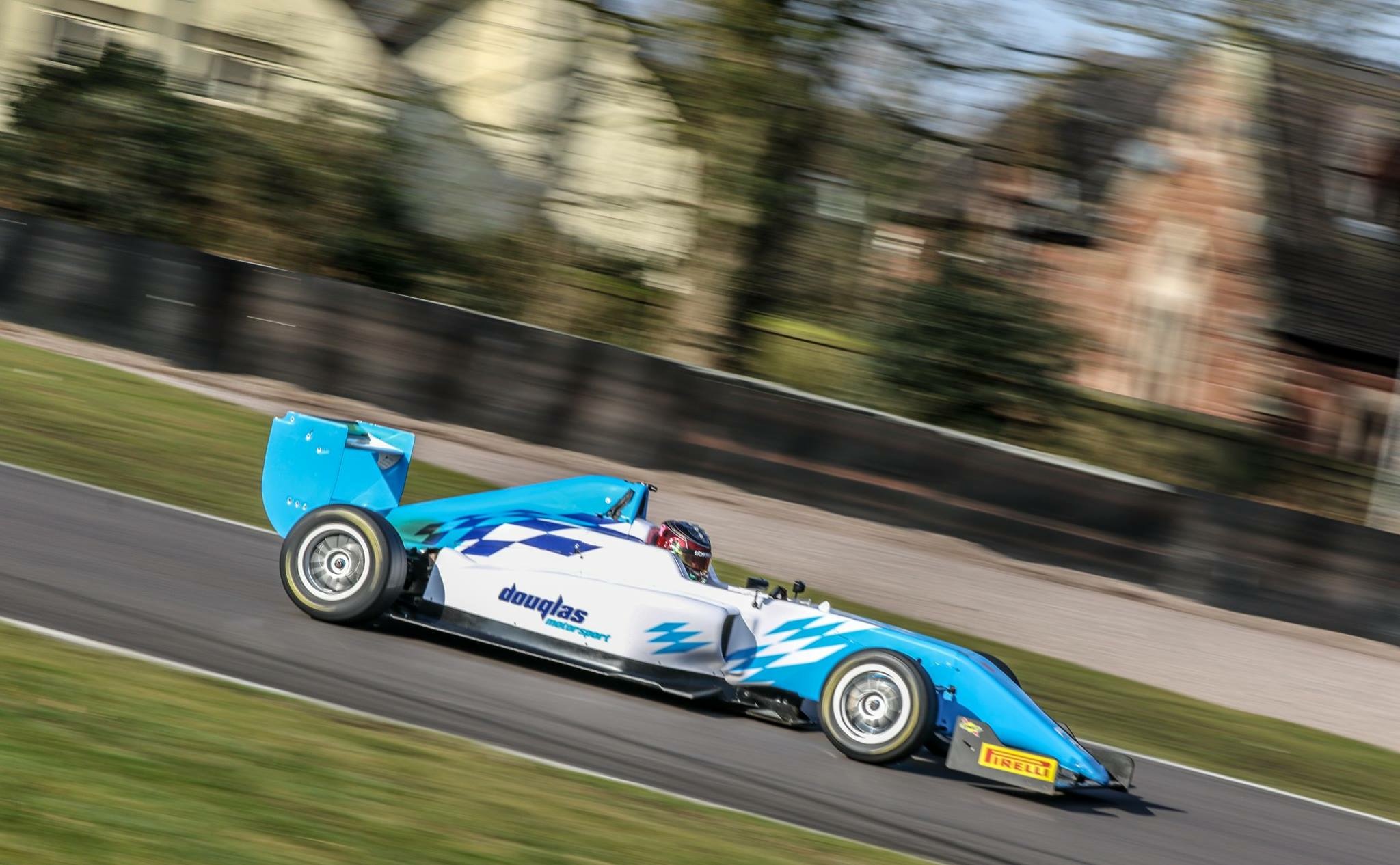 Douglas Motorsport’s female pairing of?Jamie Chadwick and?Alexandra Mohnhaupt is one of the most exciting in the field, and not because of the gender politics.

Chadwick is a proven driver, she was the 2015 British GT4 champion, and finished ninth in the 2017 British F3 standings with one podium finish in her first year in single-seaters.

Wins are an absolute possibility for her this year, and there’s nothing to say she won’t be one of the top four drivers in the standings come the end of the year.

Unlike Chadwick, Mohnhaupt has not won a title in car racing, but did make history last month by becoming the first female winner of an FIA-sanctioned F4 race. The Mexican has a shot at winning the 2017-18 NACAM F4 title, and despite her inexperience of racing outside of Central America, she has the potential to make a mark in Britain too. 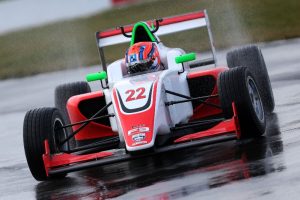 There’s a level of expectance on both?Manuel Maldonado and?Tristan Charpentier that they should be doing better.

Maldonado, cousin of Spanish Grand Prix winner Pastor, was mired in the nowhere land last year, and finished in the top 10 on seven occasions out of a possible 24. In his two years in single-seaters he has never once stood on the podium.

Families ties don’t automatically mean brilliance, but to not show any of the enigmatic talent that Pastor demonstrated in junior formulae is a curious occurrence.

The younger Maldonado believes regular podiums and wins are possible this season, although getting his first podium would be a safer bet.

“Last year I learned a lot, I didn’t know any of the tracks or cars,” Maldonado explained to Formula Scout.

“This year I’ve got the experience, it’s looking to be a better one than last year.”

Already a winner in French F4, Charpentier did in fact make it into the top 10 in four of the five British F3 races he contested last year but more will be expected from a full campaign with Fortec.

The third of Fortec’s signings is current Ginetta Junior champion?Tom Gamble. Gamble was initially looking at F4, but has decided to jump straight to F3 for his first year in single-seaters.

Second place on the media day suggests the 16-year-old is already comfortable with the car, but being quick on your own is different to being quick in the wake of several other cars. His single-seater inexperience might hurt his title ambitions for this year, but he could be Fortec’s strongest challenger. 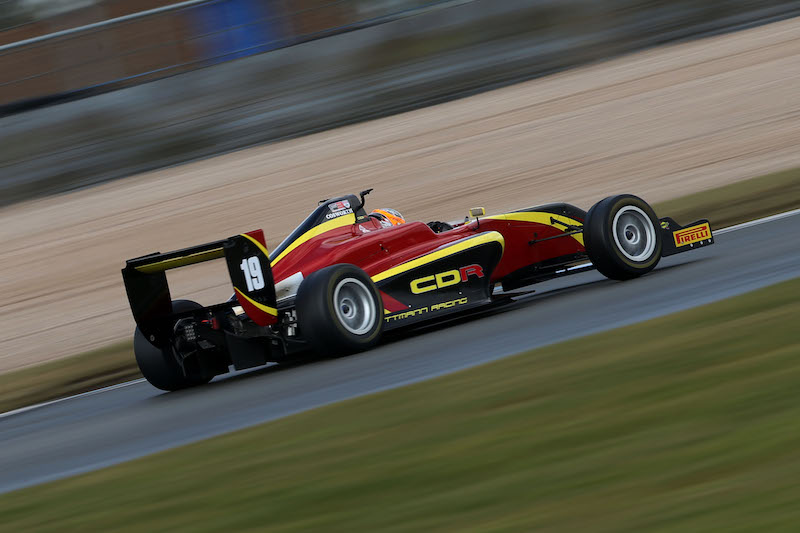 Chris Dittmann Racing has been going through a bit of a lull in results since the championship was renamed British F3, but with?Harry Webb things may change.

The 2017 British F4 Challenge Cup runner-up would have been a strong contender for overall F4 honours had he stayed for a second season, but has decided to jump up a run to F3.

Although he doesn’t even have a full season of experience in F4, he has gained knowledge by driving in other machinery, and was by no means out of touch in the media day test, topping a session.

The lack of a full-time team-mate to learn off will undoubtedly hamper Webb, and although he has the potential to win races, it’s more a question of whether the whole package has enough to be at front every weekend.

Chia Wing Hoong?will drive for the team in the first round at Oulton Park, and may contest others, although his?focus for this year is a testing programme due to his education commitments.

The Malaysian has mostly been undertaking that testing with Fortec, but it the four-car ruling designed to incorporate Monger doesn’t extend to the whole grid, any further appearances are most likely to be with Chris Dittmann’s team. 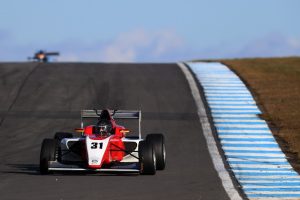 Hilspeed has signed two unknowns for 2018, but both drivers could realistically challenge for podiums and wins by the end of the year.

Their lead driver will likely be?Ben Hurst, the reigning Toyo Tires F1600 champion, a regional Formula Ford series in Canada. The 20-year-old is now in his fourth year in single-seaters, although his first in winged cars.

He has experience of Brands Hatch, albeit just the Indy layout, after entering the FFord Festival last year, and although he has a lot to learn this year, has shown that he is a competent driver who shouldn’t embarrass himself.

His team-mate?Jusuf Owega?is a car racing novice, and has spent most of his career karting in Germany, with considerable success. He’s ventured onto the European circuit too, and will find the step up to British F3 a significant change in scenery and quality.

Owega also won’t reach his 16th birthday, the minimum age for F3, until after the first round, meaning he will be further inexperienced compared to his rivals. If he picks up the craft of single-seater racing quickly though he could do well, and small grid sizes means there is a greater chance of notable results.