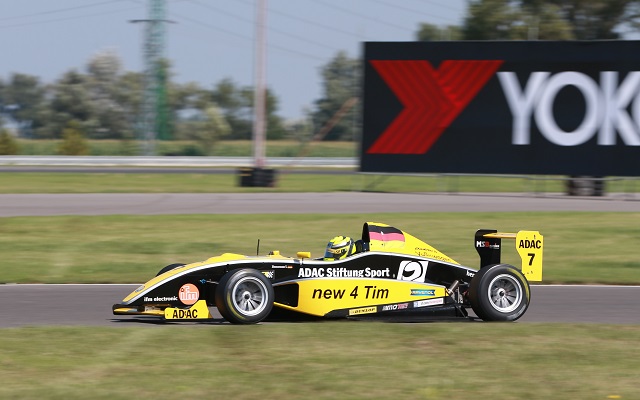 Neuhauser Racing’s?Tim Zimmermann pulled off a phenomenal last-lap manoeuvre to steal victory away from?Joel Eriksson in the third and final ADAC Formel Masters race of the weekend at the Slovakia Ring this afternoon.

Reverse-grid poleman?Kim-Luis Schramm led away from the line, while further behind a clash between?Fabian Schiller and?Maximilian Gunther resulted in Schiller’s retirement and sent Gunther skidding across the gravel.

At the front, a six-way battle for the top spots battle emerged, with Erkisson making his way past Schramm on lap two. Eager to not lose ground to his teammate,?Dennis Marschall pulled off an ambitious move on the German at the same corner, which resulted a slow Schramm making contact with Igor Walilko, who in turn spun into championship leader Mikkel Jensen. Both the Polish racer and the Dane retired on the spot, bringing out the safety car.

Following an extended safety car period, the race resumed as Eriksson immediately began trying to stretch his advantage. Further back, Zimmermann, who had started the race in ninth, made his way past Marschall and set off after the Swede. The German ate away at Eriksson’s lead and managed a terrific cut back move on the final lap to take his first victory of the season.

With Eriksson taking second, Marschall in third made it an all-rookie podium. Philip Hamprecht was the top Mucke man in fourth, whilst Schramm ended up fifth ahead of?Luis-Enrique Breuer.

Jensen’s retirement means his lead over Gunther has been cut down to 56 points, while Zimmermann’s victory provisionally puts him fourth, just one point behind Ralph Boschung, who hit trouble on the final lap of the race.