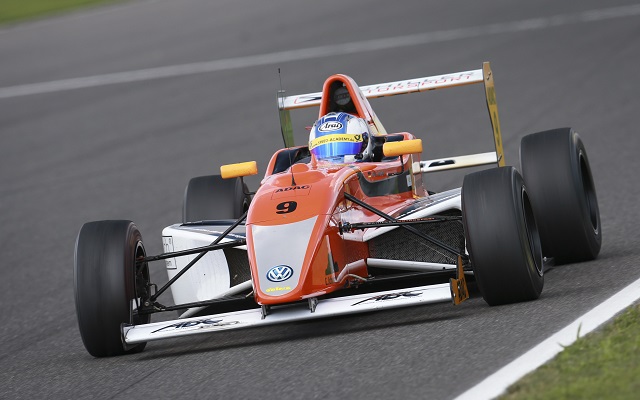 Fabian Schiller held off a late charging Mikkel Jensen to claim his second victory of the season in a thrilling race two of the fifth round of the ADAC Formel Masters series in Slovakia this morning.

Pole sitter Jensen assumed the lead in turn one with Schiller remaining in second place ahead of Tim Zimmermann and Ralph Boschung. The four would run nose to tail for several laps until Zimmermann spun out of contention just before the halfway point.

Schiller continued to pile on the pressure on the championship leader, who would eventually make a mistake, running wide and allowing Schiller into the lead and Boschung into second.

He set off after Schiller, reeling in the German on every lap, but it would be to no avail, as the Dane had to settle for second at the line by just 0.553s seconds. Boschung rounded off the podium in third with Maximilian Gunther a distant fourth.

Further back there were thrilling battles throughout the field with the fifth position hotly contested between Igor Walilko, Dennis Marschall and Joel Eriksson. Walilko eventually came home fifth, repeating his best finish of the season, with Lotus stable mates Marschall and Eriksson sixth and seventh respectively. Kim-Luis Schramm was eighth ahead of the recovering Zimmermann, while Marvin Dienst rounded out the top ten.

The results mean that Jensen increases his championship leader over second place man Gunther to 58 points with Boschung third, a further 41 points adrift.